This Man is Living His Dream: Why Steve Scheuring Chooses AMSOIL

We all have dreams. Maybe it’s a trip across America on a Harley. Or the backcountry sledding trip of a lifetime. Maybe it’s climbing boulders and crossing ravines in a 1943 Willys Jeep. For Steve Scheuring, it was building a championship-winning Snocross team.

One day, 21 years ago, Scheuring decided to go for it. And he’s never looked back.

Today, Scheuring is a man living his dream. 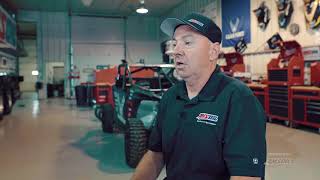 It’s about racing and the community

Even though starting the team and giving up a nice paycheck was a gamble, Scheuring’s drive and determination ultimately paid off. His professional snocross and side-by-side riders regularly climb the podium at events around the country.

Scheuring believes in his people. His goal is not just to be the fastest (although that certainly helps), but to build a team in which his community can take pride. Every autumn, racers flock to his 23-acre industrial park in Aurora, Minn., where Scheuring maintains a practice track complete with multiple snow-making machines.

When he’s not racing, Scheuring chases wildfires for the U.S. Forest Service. It’s fair to say Scheuring runs on adrenaline. 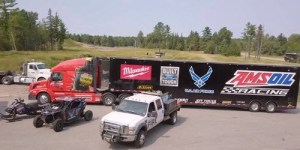 Scheuring’s relationship with AMSOIL goes beyond the AMSOIL logos on his semi or race vehicles.

In 2017, Lincoln Lemieux was 14 laps into the 20-lap race and going strong. Then he started slowing down and losing power. He pulled off the track and drove back to the trailer. The heat from Lemieux’s Ski-Doo RS600 engine was overwhelming. “There were parts of the engine that melted,” said Scheuring. “You could smell that antifreeze had gotten hot. Everything was just hot. That’s the best way I can describe it. Just hot.”

It turned out a $1 clamp had broken, separating the coolant lines and causing the engine coolant to pump from the system. The rubber O-rings that separate the cylinder from the head also melted, which caused the engine to lose compression and power. “There were a few other gaskets that actually melted inside the motor,” said Scheuring.

In stock condition, Lemieux’s engine produces about 130 hp, but the team relies on piping, clutch, carburetion and other modifications to increase power by 20 percent. The modifications and lack of coolant exposed the engine to intense heat far beyond standard operating temperature.

“I believe 100 percent the reason that motor lived was because of the AMSOIL products.”“We go above and beyond the capabilities of these motors. If they fail they cost us money, they cost us time and they cost us races, and we can’t afford to lose any of those,” said Scheuring.

As Scheuring puts it, DOMINATOR Synthetic 2-Stroke Racing Oil saved his engine. “We’ve worked with AMSOIL the last 20 years developing two-stroke oils for our race sleds,” said Scheuring. “In my opinion, I believe 100 percent the reason that motor lived was because of the AMSOIL products.”

So, whether you’re riding the trails this weekend, or revving up the horsepower of your hobby car, we at AMSOIL love enabling you to pursue your passion.