That’s what you call a concoction of two-stroke oil and gas that’s been slopped together with no measuring tools and no regard for engine protection. Your chainsaw or string trimmer could be running on a 50:1 mix. Could be 72:1. Could be 147:1. There’s no telling.

I often made swamp mix back in the day. Like other adherents to the dark art of mixing foul-smelling liquids in a dimly lit shed, I did it for a couple reasons: 1) I didn’t have clearly marked measuring containers at the ready, and 2) even if I had, I wouldn’t have felt like playing chemist with my chainsaw when I’d rather be cutting brush.

I never blew up a saw doing this. But, then again, I’m not a professional logger, so I didn’t cut often.

Some people don’t like mixing two-stroke fuel/oil because it’s a mess. Some hate it because math makes their brain hurt. 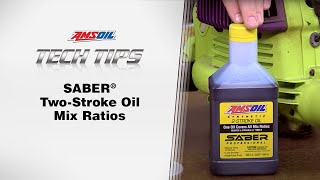 What is a two-stroke mix ratio?

The math isn’t that tough to understand. Say your chainsaw manufacturer recommends a 50:1 fuel/oil mix. This simply means you need 50 parts of gas to one part two-stroke oil. Two-stroke engines derive lubrication from the oil mixed directly into the gasoline, unlike your car engine, which lubricates itself with oil housed in an oil sump and circulated by an oil pump.

Complicating things, some equipment manufacturers recommend different mix ratios. While most modern trimmers, chainsaws, leaf blowers and the like call for 50:1, some older equipment recommends 32:1. If you have multiple pieces of equipment with different mix ratios, you have to mix and store multiple cans of fuel. That’s not only a hassle, it’s a situation begging for problems when you accidentally dump 50:1 in your saw that takes 32:1.

This scenario likely isn’t a problem for landscapers, loggers and other professionals who replace their equipment often due to heavy use. But plenty of homeowners still use older equipment that calls for a richer fuel mixture.

Life would be much easier if every manufacturer recommended the same mix ratio, right?

And, to eliminate the hassles of mixing fuel, we offer bottle sizes matched to certain sizes of gas cans. For example, to mix AMSOIL SABER Professional at 50:1 in a 2.5-gallon gas can, just use an entire 6.4-oz. bottle. Use half the bottle for a 100:1 mix ratio.

That’s the ratio I now use in my chainsaw. As the piston images show, SABER Professional mixed at 100:1 outperforms other two-stroke oils at 50:1, fighting power-robbing deposits and maintaining operability.

AMSOIL SABER Professional mixed at 100:1 delivers better protection against power-robbing deposits than other oils mixed at 50:1.

With SABER Professional you spend less on oil, get better protection and eliminate hassle when mixing fuel. And you never have to make swamp mix again.