What to Know When Choosing a Fork Oil

A fork oil’s number-one task is to deliver consistency. Consistent dampening despite temperature changes. Consistent rebounds despite different terrain. Consistent performance so you can ride or drive confidently.

What fluid would provide the best shock consistency?

Yes, water. But you don’t want to use it in your shocks for reasons you can probably guess, but we’ll get to that in a bit.

That means one brand’s “light” fluid could behave like another brand’s “medium” fluid, and so on.

The shocks on your dirt bike, race car, ATV or other vehicle absorb abnormalities in the terrain and help stabilize the ride. They also absorb impact when landing a jump, taking some of the beating off the vehicle and your body. And they “load up” with energy when approaching a jump, helping you fly over whatever’s in your way.

The shock uses fluid to control dampening and rebound.

Say you’re riding your dirt bike and land a jump. The force depresses a piston inside the shock that pushes fork oil through calibrated valves. The fluid’s rate of flow through the valves influences the amount of dampening and rebound.

The fluid’s viscosity (often thought of as its thickness) influences how fast or slow the oil flows through the shock valves. If you prefer quick rebounds, use a lighter fluid. If you like slower rebounds, use a heavier fluid.

Sure, if the viscosity of the shock oil never changes.

However, cold ambient temperatures increase the oil’s viscosity, resulting in slower rebounds. Then, after you’ve made a few laps and the vehicle’s heated up, the fork oil thins as it warms. That’s because fluids become thinner when they warm up. Think of molasses or honey. The warmer oil flows faster through the shock valves, leading to inconsistent shock feel.

That’s why water theoretically would provide the most consistent shock feel. Its viscosity doesn’t change between 33ºF (0ºC) and 211ºF (100ºC).

On a cold morning, after a long ride or on a blazing-hot day, water maintains the same viscosity provided it doesn’t freeze or boil. When was the last time you had a thin or thick glass of water? Hence, it would flow at the same rate through the shock valves, resulting in consistent feel. 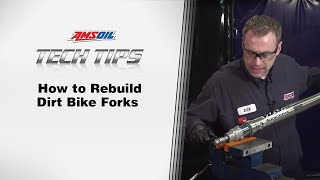 Much more than flow, though

But the fork oil must do more than influence rebound and ride feel. It also must protect against wear and corrosion, two tasks at which water is notoriously bad.

The shock oil has to protect the shock tubes, seals and valves from wear as they constantly rub together. Minus good wear protection, the shock would tear itself apart in short order. Plus, the oil must form a layer on parts to prevent formation of corrosion. If corrosion starts, it won’t stop, spreading and depositing flakes of contaminant in the oil that act like sandpaper and scour metal parts until they’re worn out.

Look for a high-VI fork oil

Instead, look for a fork oil with a high viscosity index (VI). A higher VI indicates better resistance to viscosity changes throughout broad temperature swings. That translates into consistent shock performance and feel despite the ambient and operating conditions. And a consistent ride equals a more effective rider.

Points to consider when looking for fork oil

1) No standard viscosity – Your engine manufacturer recommends a specific viscosity of motor oil for best protection and performance. In the world of shocks, there are no universal viscosity requirements or recommendations. Each shock oil manufacturer is free to formulate its oils to whatever viscosity it deems appropriate. That means one brand’s “light” fluid could behave like another brand’s “medium” fluid, and so on.

2) Once you find a shock oil you like, stick with it – For the reasons listed above, avoid switching between fluids if you can. Once you have the proper suspension set-up for your body weight and riding style, stick with it. The shock oil is one of the biggest variables in your suspension tune, and messing with it can throw off suspension feel and your riding confidence.

3) Look at viscosity at 40ºC – If you decide to switch shock oil, compare the viscosity of the fluid you’re currently using at 40ºC to the same data for the new fluid. The closer the results, the more similar the oils will perform. Reputable manufacturers publish product data bulletins for their shock oils and post them online. If you can’t find a data sheet for the oil you’re considering, think twice before using it.