Catching up with Van Strydonk and his Win

Imagine heading out on the trail with your sled and crossing over a lake. You open up for about 300 yards, then all of a sudden pinch into a sharp turn. Your inside ski raises and you fight with all your might to hold 375-plus pounds down while at speeds of 65-70 mph, pinching around a corner. That, my friends, is a short introduction into what it is like to pilot an ice oval racing snowmobile.

Champion ice oval racer Nick Van Strydonk is one of the select few who’ve mastered the art of racing on the ice. He started racing Kitty Kats at age four, winning his class on his very first weekend of racing. Soon, he was moving up the ranks, eventually reaching the pinnacle of ice oval racing – the AMSOIL World Championship Snowmobile Derby, and ultimately landing on the short list of riders who have captured that championship more than once.

But getting there wasn’t easy. In our most recent episode of the AMSOIL Signature Series, we take you to the AMSOIL Eagle River World Championship and ride with Van Strydonk to see what that journey was like, including a look at his famous “push to the finish” in 2014.

We also recently caught up with Van Strydonk to talk about his heroic win and what it felt like to achieve what most racers only dream of. 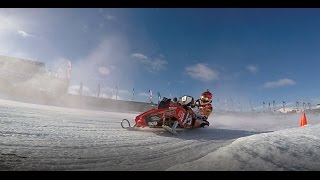 AMSOIL: What do you feel you gained/learned after your amazing 2014 experience?

After the 2014 push to the finish, I learned more about myself as an athlete and as an individual. I knew that I couldn’t give up that early, and I just kept telling myself that I need to finish the race, otherwise I’d always look back and be upset with my performance and wonder what I actually could’ve accomplished.

Did you feel like you had to prove yourself after blowing a belt Friday night this year?

To me, I guess I don’t ever feel like I have to prove myself to anyone. I like to live each day to the fullest, and do the best I can. Because things can change so fast, I don’t ever want to live with any regrets over any situation I have control over. Blowing a belt on Friday night was very unexpected for us, as we never have had that happen, but it made our team stronger and we worked harder to go after a win.

What makes this year’s win even sweeter?

This year’s win was made sweet by the sheer fact that we had been chasing another win for so long, and it seemed like something always got in our way of claiming #2. Also, having Beau (my cousin) back on the team, and racing in his first World Championship and finishing fourth – that was very bittersweet. He asked me to help him train, and I think I have a pretty good program going. Watching him transform and undertake the challenges I gave him before the season even started, then battle for a podium the whole race – that to me was half the excitement of this year’s win.

We know you use AMSOIL DOMINATOR® Synthetic 2-Stroke Racing Oil in your race sled, but what are your other go-to AMSOIL products?

My favorite AMSOIL product is a really close call between two products that I use almost weekly. Fist would have to be the Miracle Wash. I like to do custom painting and airbrushing as a hobby, and in between buffing and waxing the things I paint, it’s a great product to really clean and shine the finished items, whether it’s a helmet, or even a full-blown custom motorcycle. Plus, Miracle Wash works really well in a pinch if I end up at a car show with no car wash in sight. A quick wipe down with Miracle Wash and no one would know the difference.

The next product I love is the Firearms Cleaner and Protectant and 100% Synthetic Firearm Lubricant and Protectant. Another hobby I’ve really enjoyed within the last couple of years is heading to the shooting range and having a blast, literally, with a couple really close friends and family for a day. After the smell of gunpowder has settled, I usually like to head home and clean all my firearms for the next weekend and keep them well oiled to prevent any malfunctions while at the range.

The AMSOIL Signature Series profiles the professional drivers and weekend warriors who battle week after week on race tracks and event courses across America. Experience every exhilarating high and frustrating low as they fight for victory. And dive into the drama of each racers’ title hopes. To get inside access to more videos like Van Strydonk’s before they’re introduced to the public, sign up here.