A Closer Look at Grease 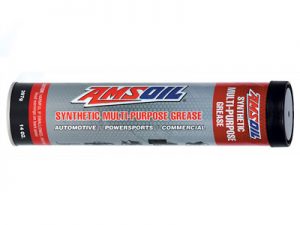 Grease is comprised of two structural components: a base fluid and a thickening agent. Different types and combinations of base fluids and thickeners, along with supplemental structure modifiers and performance additives, combine to give the final product its special lubricating properties.

Many different types of base oil may be used in the manufacture of a grease, including petroleum (naphthenic, paraffinic) and synthetic (PAOs, esters, silicones, glycols). Just as with motor oils and transmission fluids, the viscosity of the base oil is the most significant property. A lighter, lower-viscosity base oil is used to formulate low-temperature greases, while a heavier, higher-viscosity base oil is used to formulate high-temperature greases.

Simple soaps are formed through a process known as saponification, where a fatty acid or ester (of either animal or vegetable origin) is combined with an alkali or alkaline earth metal and reacted with the application of heat, pressure or agitation. The fiber structure provided by the metal soap determines the mechanical stability and physical properties of the finished grease.

Additives such as extreme-pressure, anti-wear and friction-reducing agents are added to the grease to enhance performance, much like the additives in lubricating oils. Performance requirements, compatibility, environmental considerations, color and cost all factor into additive selection.

Greases are classified into nine consistency grades (000, 00, 0, 1, 2, 3, 4, 5, 6) established by the National Lubrication and Grease Institute (NLGI). NLGI #000 greases are nearly fluid, while NLGI #6 greases are nearly solid. The most commonly used grease is NLGI #2. Softer grades are often used for improved pumpability or low-temperature service, while harder grades are used where leakage or sealing are particular concerns.