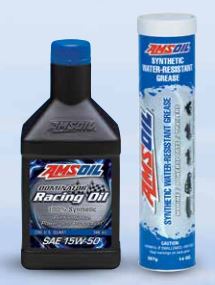 Seven Marine, maker of the world’s most powerful outboard motors, has a saying: We move the people who move the world. The Germantown, Wis. company designs, builds and sells outboard motors that produce up to an astonishing 627 hp and power some of the fastest and most impressive watercraft in the world.

All that power places tremendous stress on their sophisticated motors, which is why they turned to AMSOIL synthetic lubricants as their factory- and service-fill lubricants after having previously used Mobil* products. We sat down with Eric Davis, Seven Marine Vice President, to get the story.

AMSOIL Magazine: What makes Seven Marine unlike any other manufacturer of marine motors?

Eric Davis: We build the most powerful outboards available on the market today. We use a completely different technological approach than any other outboard manufacturer by using the small-block supercharged V-8 out of the Cadillac* CTS V and applying that in its normal horizontal configuration under the cowl. And that really makes Seven Marine unique because all other outboard motors are vertically oriented. That means we can use the performance, quality and emissions advancements that are central to automotive engines and apply that to outboard motors for the first time. In addition, we pair the engine to a ZF* marine wet-disc-clutch transmission. We’re the only outboard that uses a transmission. Because of that, our motors don’t shift in the lower unit.

AMSOIL Magazine: What performance advantages does that design provide?

Davis: It allows us to optimize the lower unit with a twin-pinion, race-inspired design that’s smaller in diameter. That benefits us in high-speed-cruise fuel economy and top-speed capability. A twin-pinion also gives you a tremendous amount of durability.

So, when you use a horizontal crankshaft engine, go with a wet-disc-clutch transmission and finish with a twin-pinion lower unit, you really get an outboard that’s built completely different, which is how we’re able to deliver the amount of power and torque to the propeller that sets us apart from everyone else.

AMSOIL Magazine: Your most powerful motor produces 627 hp. On what type of watercraft are people using your outboards?

Davis: The vast majority of our applications are multi-engine, and the trend lately has been more quads than anything [using four engines simultaneously]. We address the market that’s called the ‘super consoles,’ so we’re talking about 40-plus-foot, centerconsole, off-shore boats. Four engines can be done using a boat as short as 43 feet and as long as 61 feet.

Davis: By the time you find out what they’ve done or what they do, they’ve touched your life in some way, shape or form. We use as a corporate tag line, ‘The Power to Move Those Who Move the World,’ and that really came from the fact that our customers are exactly those people, whether it’s the northern hemisphere’s largest onion farmer or the family that owns the third-largest grain distributor in the world – all kinds of people like that. They have truly amazing stories.

AMSOIL Magazine: How do they use your outboard motors?

Davis: It varies a lot. In general, they use them for transportation. They’re moving great distances, and what makes the applications unique for Seven Marine is that they’re trying to traverse those distances at high-speed cruise. They use the applications for everything from island-hopping to poker runs to deep-sea fishing. We have customers in the Gulf of Mexico who are running 150 miles to fish the rigs, so they’re cruising three hours at 50 mph to get out there and fish. We have people in Alaska 150 miles from civilization. Generally speaking, they’re covering great distances at pretty good clips.

AMSOIL Magazine: Why did you choose AMSOIL synthetic lubricants for your engines and transmissions?

Davis: When you’re trying to deliver the most luxurious experience for the customer and deliver the most performance at this level of power, you really have to have the best of everything to make sure it works properly. And you have to be confident that you have the best lubricants to ensure you’ve got the ultimate in durability. AMSOIL, on the engine and transmission side, has been the best products we can find. That allows us to be confident that when we do a factory-fill and recommended servicefill with AMSOIL, that you’re going to get that same factory performance day-in and day-out.

AMSOIL Magazine: What did your own test results tell you about AMSOIL products?

Davis: When we started doing oil sampling from dyno testing and looking at the performance of the oil and its degradation, the AMSOIL results were superior than what we were using before [Mobil products]. We’re endeavoring to build the absolute best world-class products we can and innovate in the marine industry, so we prefer to have an oil that we feel is as innovative and technologically advanced as the engines that it’s going into, and that leaves us with AMSOIL 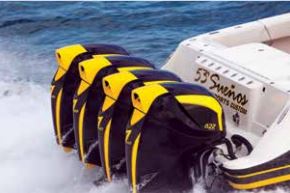