Marco Navarro asks on our Facebook page about break in oil, with attention paid to powersports engines. Thanks for the question, Marco.

Maintaining an engine is a constant fight against wear. Over time, wear not only results in expensive damage, it reduces compression, robbing your engine of power.

That’s why it can be tough to accept that “controlled wear” during a new or rebuilt engine’s break in period is critical to maximizing its power and longevity.

One of the primary reasons to break in an engine is to seat the piston rings, and that means allowing the rings and piston skirt to carefully wear down the peaks (called asperities) on the cylinder wall.

The images show what we mean. 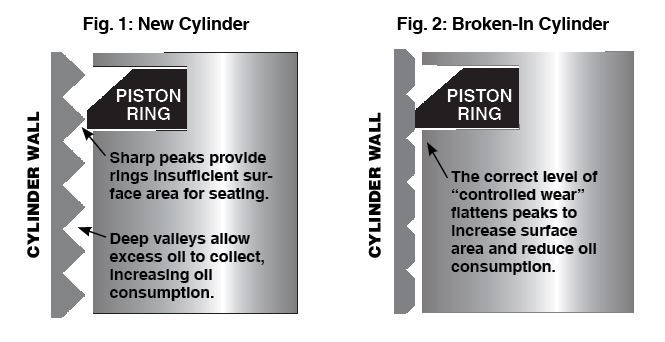 Although a new or freshly honed cylinder appears smooth to the naked eye, it contains microscopic peaks and valleys. If the valleys are too deep, they collect excess oil, which burns during combustion and leads to oil consumption.

The sharp peaks, meanwhile, provide insufficient area to allow the rings to seat tightly. That means highly pressurized combustion gases can blow past the rings and into the crankcase, contaminating the oil and taking potential horsepower with it.

Breaking in the engine wears the cylinder-wall asperities, providing increased surface area for the rings to seat tightly. The result is maximum compression (i.e. power) and minimum oil consumption.

That brings us to the other primary reason to break-in an engine: to season, or harden, the flat-tappet cam. Flat-tappet cams can wear out faster than their roller-cam cousins, especially in engines modified with high-tension valve springs.

And cam wear is bad. Really bad. Worn lobes or tappets affect valve lift and duration, which reduces engine power and efficiency. In extreme cases, increased pressure can remove material from the lobes and deposit it in the oil, where it circulates through the engine and causes damage. Break-in helps harden the metal so it’s more resilient to wear.

That raises a critical question: How do we simultaneously allow controlled wear to the cylinder wall/piston rings while protecting the cam against wear? Those two tasks seem mutually exclusive.

In a word, oil

The solution is to use a properly formulated break in oil that allows controlled wear at the cylinder wall/piston interface, but that also protects the cam lobes and tappets from wear.

How do we accomplish this black magic?

Most break in oils, including AMSOIL Break-In Oil, use conventional base oils. Compared to their higher-quality synthetic counterparts, conventional base oils result in a thinner, less durable protective oil film on engine parts. The thinner fluid film allows controlled wear at the cylinder wall/ring interface.

But what about the cam? Won’t it wear, too?

That’s where anti-wear additives come into play. ZDDP anti-wear additives are heat-activated, meaning they provide wear protection in areas of increased friction. In this case, it’s at the cam lobe/tappet interface. The additives form a sacrificial layer on the surface of parts, which absorbs contact and helps prevent cam and tappet wear.

As a rule of thumb, a good break in oil should be formulated with at least 1,000 ppm ZDDP. At AMSOIL, we take it a few steps further; our Break-In Oil contains 2,200 ppm zinc and 2,000 ppm phosphorus.

How long does break in require?

Another rule of thumb states you should season a flat-tappet cam by running the engine above 2,500 rpm for 15 minutes.

As for seating the rings, our testing has shown it can take as little as seven dyno passes. That time varies depending on the engine, ring tension, cylinder hone and other factors.

If you don’t have access to a dyno, follow the engine builder’s or manufacturer’s recommendations. If none are provided, consult the recommendations on the break in oil label. In general, run the engine under light-to-moderate loads for about 500 miles. Again, that duration is a rule of thumb, but break in shouldn’t exceed 1,000 miles. Then, drain the break-in oil, install the synthetic oil of your choice and commence driving.

Check out 5 Ways to Boost Horsepower for Under $500

You can also perform a leak-down test. Another, albeit more time-consuming, method is to remove the exhaust headers and check for oil residue in the exhaust ports. Presence of oil shows the engine burning oil, meaning the rings aren’t completely seated. Once the oil residue is gone, the rings are seated. 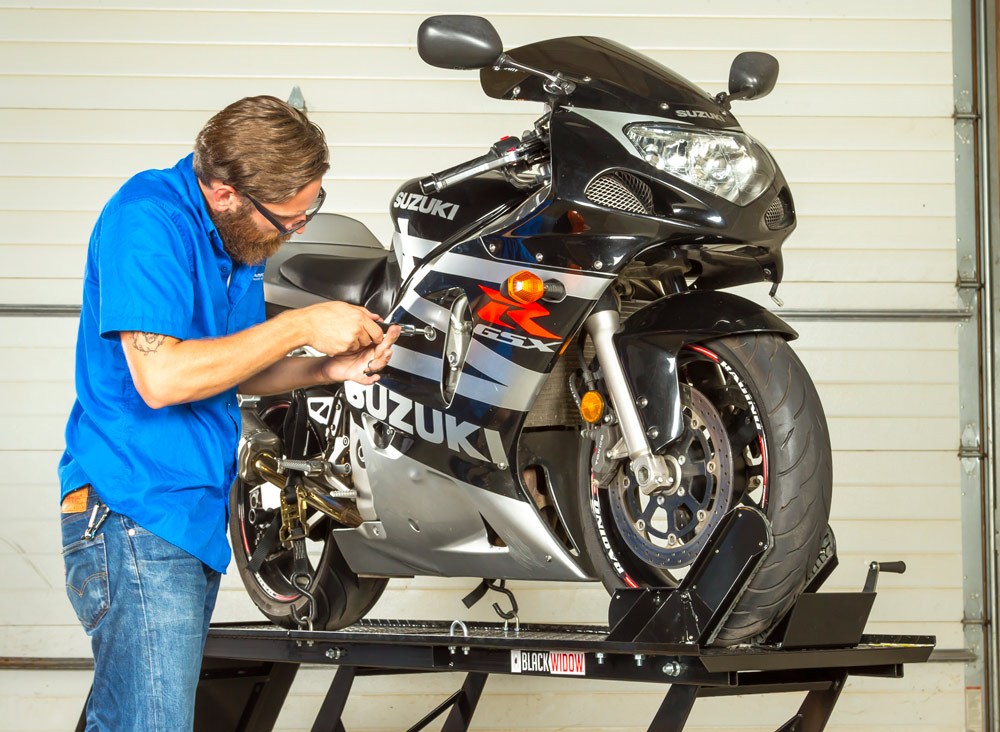 What about powersports or motorcycle engines? HALT!

Ask yourself a few questions about your motorcycle, ATV or other powersports application before using a break in oil:

Given the above challenges, we recommend breaking in a rebuilt powersports engine using the motor oil you’ve always used. Run it according to the original equipment manufacturer’s (OEM) new-engine recommendation, then change the oil. In short, treat it like a new engine from the factory.

For new engines, just follow the OEM guidelines. Typically they recommend a shorter interval for the first oil change to remove wear particles and contaminants from the factory. Then, change to the AMSOIL synthetic motor oil that’s recommended for your application and commence riding. See what I’m saying?