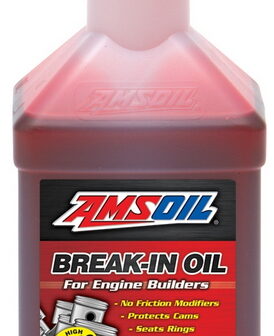 Break-In Oil (SAE 30) Designed for High-Performance and Racing Engines Formulated without friction modifiers to allow for quick and efficient piston ring seating in new and rebuilt high-performance and racing engines. Contains zinc and phosphorus anti-wear additives to protect cam lobes, lifters and rockers during the critical break-in period when wear rates are highest.

AMSOIL Break-In Oil is an SAE 30 viscosity grade oil formulated without friction modifiers to allow for quick and efficient piston ring seating in new and rebuilt high-performance and racing engines. It contains zinc and phosphorus anti-wear additives to protect cam lobes, lifters and rockers during the critical break-in period when wear rates are highest, while its increased film strength protects rod and main bearings from damage. AMSOIL Break-In Oil is designed to increase compression, horsepower and torque for maximum engine performance.

“We get a lot of feedback on the AMSOIL break-in oil and I sell quite a bit here in the store. I to have used it in an air cooled Corvair with great results. In about 100 miles all issues with the fresh engine were solved. Even the price is just right!”

Quickly Seats Rings
The primary goal during engine break-in is to seat the rings against the cylinder wall. Properly seated rings increase compression, resulting in maximum horsepower; they reduce oil consumption and prevent hot combustion gases from entering the crankcase. To achieve this, however, the oil must allow the correct level of controlled wear to occur between the cylinder wall/ring interface while maintaining wear protection on other critical engine parts. Insufficient break-in leaves behind peaks on the cylinder wall that prevent the rings from seating. The deeper valleys, meanwhile, allow excess oil to collect and burn during combustion, increasing oil consumption. Too much wear results in cylinder glazing due to peaks rolling over into the valleys and preventing oil from collecting and adequately lubricating the cylinder wall. Protects Critical Parts from Wear
New flat-tappet camshafts and lifters are not seasoned or broken in and must be heat-cycled to achieve proper hardness. During the break-in period, these components are susceptible to accelerated wear because they are splash-lubricated, unlike other areas of the engine that are pressure lubricated. AMSOIL Break-In Oil contains high levels of zinc and phosphorus (ZDDP) additives designed to provide the anti-wear protection required during this critical period.

RECOMMENDATIONS
The engine builder’s or manufacturer’s break-in recommendations should be followed if available. Break-in period should not exceed 1,000 miles. When the engine is new, the exhaust ports will have a large area of oil residue (Fig. 3). As the rings begin to seat, less oil is passed and the oil residue area begins to shrink (Fig. 4). When the rings are fully seated and have formed a tight seal against the cylinder walls, no oil residue will be evident. Other common methods to determine if rings have seated include performing a leak-down test or horsepower measurements over time. Break-in duration will vary between engines. Afterwards, drain and fill the engine with an AMSOIL high-performance synthetic oil that meets builder or manufacturer specifications.

HEALTH & SAFETY
This product is not expected to cause health concerns when used for the intended application and according to the recommendations in the Material Safety Data Sheet (MSDS). An MSDS is available via the Internet at www.amsoil.com or upon request at (715) 392-7101. Keep Out of Reach of Children. Don’t pollute. Return used oil to collection centers. 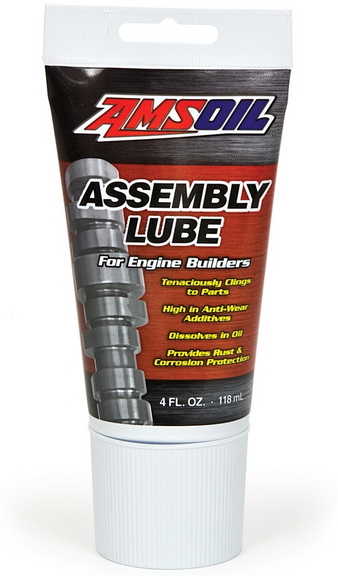