Watch Scott Judnick Go Big – And Why We’re Into Snow

At AMSOIL, we like to do things big. And when it comes to the world of Snocross, Scott Judnick of Judnick Motorsports likes to do things just as big. Check out his story below. 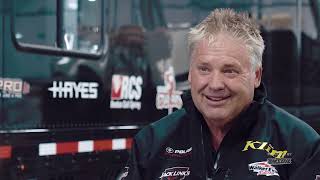 It’s About the People

Twenty-two years ago, Scott Judnick took his sons racing. Within just a few years he was running a rig across the country to race. His two sons developed into professional riders complete with mechanics and trailers set-up for the AMSOIL Championship Snocross Series. Find Judnick anywhere on the track or in the pits and you are sure to be greeted with a smile and a “How are ya?”

For Judnick, it’s all about the people within the racing community. Fielding the dreams of the three young racers on his team is just a bonus.

Judnick went into the 2018-19 Snocross season with notable riders expected to dominate the Pro, Pro Lite and Sport classes. The season started on a high note with Sport rider Carson Alread taking the checkers to open the season in Duluth, Minn.

Noticeably absent from the Friday night DOMINATOR race was Pro Lite rider Nick Lorenz. A re-aggravated knee injury forced Lorenz to take it easy opening weekend. After further observation, he underwent surgery that ended his season before it started. Making matters worse for the team, a scary landing during practice in Canterbury, Minn., left Alread sidelined for the remainder of the season, too.

But that didn’t stop Judnick from continuing to compete. He signed Canadian standout RJ Roy, along with Pro rider Corin Todd. Roy has proven he can hang with the big boys, landing just short of the podium multiple rounds.

“Our engines are tuned to run on the very edge and placed under extreme demands in extreme weather conditions,” said Judnick. “We’ve been using DOMINATOR since its inception and it has never let us down.” 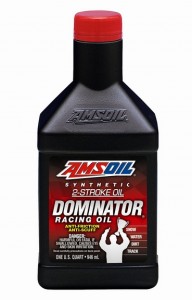 Not to be forgotten, the chaincases on these sleds also need attention. Judnick uses AMSOIL Synthetic Chaincase & Gear Oil to protect his sleds’ chaincases.

“The chain and sprockets on our race sleds take a beating from the harsh landings and constant changes in snow and track conditions. With just routine maintenance, AMSOIL Synthetic Chaincase & Gear Oil prevents us from having parts failures in these areas,” said Judnick.

Another team favorite? Mudslinger. It provides a protective, non-stick layer of armor against the accumulation of snow.

Will Judnick go big this weekend? Be sure to watch his team live in action this weekend at the Seneca Allegany Snocross National in Salamanca, N.Y.