Watch How These Snowmobile Oils Handle -40º

Watch How These Snowmobile Oils Handle -40º 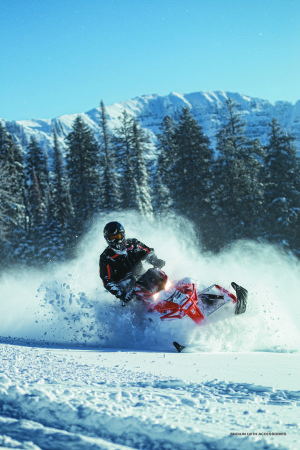 Like the engine in your car or truck, the engines that power your two-stroke snowmobile are growing more sophisticated with each passing year. The same demands driving changes in the automotive market are influencing two-stoke engines as well – the government requires reduced exhaust emissions, yet you don’t want any sacrifices in power and fuel efficiency.

What’s a two-stroke engine manufacturer to do? These three areas – reduced emissions, increased fuel economy and maximum performance – don’t play well together. Given the constraints of two-stroke engine design, it’s extremely difficult to build an engine that hits all three targets.

Because they don’t contain intake and exhaust valves like a four-stroke engine, controlling emissions in two-strokes is a big challenge. One strategy in today’s oil-injected engines is to adjust the fuel/oil ratio to use less oil. While this reduces emissions, it comes at a cost since using less oil increases operating temperatures and invites several problems.

A pair of popular snowmobile engines offer great examples of the innovation we’re seeing in the market. The Arctic Cat® C-TEC® uses electronics that adjust the fuel/oil ratio depending on operating conditions. In one promotional Arctic Cat video, we’re told to expect fuel/oil ratios as high as 65:1, depending on conditions, in the C-TEC2 engine. Less oil means lubrication becomes more challenging. What little oil is available to protect critical engine parts must reach components quickly, particularly in sub-zero cold.

On some Arctic Cat snowmobiles, oil is injected into the crankcase through a slot in the piston.

The C-TEC uses an interesting configuration to deliver oil to the wrist pin and bearing. The fuel/oil mixture is injected into the boost-port side of the cylinder. At higher rpm, oil is also injected into the crankcase through a slot in the piston. The setup, according to Arctic Cat, improves performance, emissions and fuel economy.

The Ski-Doo® E-TEC® offers another example. Like many cars and trucks today, the E-TEC uses direct injection. Placing the fuel injectors directly in the combustion chamber allows precise control over the injection event, which improves power and reduces emissions. This arrangement, however, comes with challenges. In a traditional two-stroke engine, fuel and oil are mixed prior to being ingested by the engine, which helps the oil flow at lower temperatures since fuel reduces oil viscosity. In the E-TEC, fuel and oil are mixed only in the combustion chamber, so the bottom end of the engine – the crankshaft and rods – are lubricated by oil alone, making the oil’s cold-flow properties critical.

In fact, Arctic Cat has made oil cold-flow a big part of its marketing.

So we thought it might be interesting to compare the cold-flow of our best all-around snowmobile oil – AMSOIL INTERCEPTOR® Synthetic 2-Stroke Oil – to the three top sled manufacturer’s oils, including Arctic Cat 2-Cycle Synthetic CTEC-2®.

Proof in the Video

How does INTERCEPTOR’s cold-flow match-up? Check out the video to find out. The OEM Fluids don’t even meet their own requirements. That says it all right there.

Then, fire up your sled and enjoy what little winter we have left.