That’s a Wrap on the 2021 AMSOIL Championship Snocross Season

Well, race fans, we made it. I mean, I’m still over here on my couch watching the AMSOIL Championship Snocross finale via livestream while my toddler builds Snocross tracks in his Kinetic sand with his Playmobil groomer (#proudmom), but the 2021 season has successfully closed with all eight weekends of racing completed. And, while organizers had to adjust the schedule due to COVID along the way, this season certainly did not disappoint.

Let’s take a look at how the season evolved. Hold onto your braaap.

The 2021 schedule ended quite a bit differently than what was initially planned thanks to the pandemic. But, thanks to Plans B, C, D and even E, we completed all 17 rounds of racing.

ERX Motorpark in Elk River, Minn., played home to the opener this season. But, with tight COVID restrictions in Minnesota, noticeably absent at the highly anticipated kickoff were the fans. State regulations forced the venue to close the event to the general public as well as move the AMSOIL DOMINATOR to a later weekend.

The popular Dubuque, Iowa stop and the “Dakota Swing” through Deadwood, S.D., Fargo, N.D., and Sioux Falls, S.D., came through unscathed as COVID restrictions in those states remained fairly loose. Sioux Falls took the place of another popular stop – Salamanca, N.Y. – shortly before the start of the season.

Where we saw the most schedule shake ups was the final three events. Initially slated for Shakopee, Minn., the “Daytona of Snocross” saw road blocks as the mostly indoor venue still would not allow events. Instead, the mostly outdoor venue ERX Motorpark hosted these rounds. The final two stops slated for Lake Geneca, Wis., and Grand Rapids, Mich., saw both private-venue concerns and state restrictions. Ultimately these last two rounds landed in the Snowmobile Capital of the World, Eagle River, Wis. 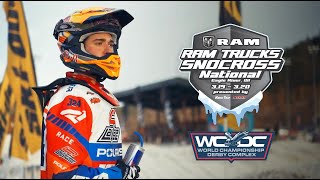 There were the usual title takers, most notably Elias Ishoel in the AMSOIL Pro Class. But just one point separated second-place Francis Pelletier from Oskar Norum, who finished third. Hunter Patenaude, of Team AMSOIL (and Pro rookie), was not too far behind in fourth. And, of course, “Cowboy” Jesse Kirchmeyer dominated in Pro Snowbike, but there were tight class races as well.

The closest title race of the season was between Marlene Andersen and Megan Brodeur in the Pro Women’s class. Brodeur was on the hunt to become the first-ever Pro Woman to win more than three titles. Meanwhile, Andersen was on the hunt for her first title after almost retiring from the sport last season. A battle royale all season, in the end it was Andersen taking home the title by a mere 10 points over Brodeur. Third place’s Inanna Hauger finished 101 points behind Brodeur. 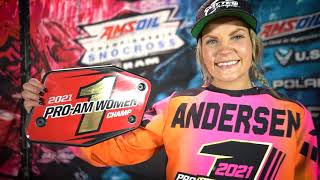 With Patenaude and Pelletier moving up to the Pro class this season, the Pro Lite class was arguably one of the most competitive classes. With a musical chairs of podium finishers, 11 different riders found themselves on top of the box in 16 rounds of racing. In the end it was Team LaVallee’s Adam Peterson who won the season title by just 15 points ahead of Travis Kern. Pro Lite rookie Carson Alread rounded out the top three.

Historically, the AMSOIL DOMINATOR kicks off the Snocross season with its head-to-head, winner-take-all format. But with a fan-less opener this year and a moving-target schedule, the $10,000 payday landed on the finale this year in Eagle River, Wis., with a new format. Following the Cup-style racing we see in off-road racing, this year’s DOMINATOR pitted Pro Lite and Pro racers against each other in a 10-minute (plus two-lap) race.

Out of the gate was Pro Lite riders Adam Peterson and Evan Daudt ahead of a row of six Pro riders. But before the opening lap was complete, Pro champ Ishoel came charging through to take the lead. But a blown belt caused Ishoel to flip his sled halfway through, allowing Peterson to regain the lead. In the end, the Pro Lite champion became the first Pro Lite rider to win the event in its 10-year history.

“I was right behind Elias and I just tried to stay with his pace and then he went down. I was like, ‘Alright, just gotta be smart and remember to breathe, then try to hit my marks.’ I’m used to practicing 10-minute motos, with me and (teammate) Kyle (Pallin). That’s a huge help for this. I was still super tired by the end of that (race).”

Check out the AMSOIL DOMINATOR highlights.

A few remaining rounds of AMSOIL Championship Snocross are still set to air on the CBS Sports Network. You can view the complete re-air schedule here. Also, be sure to tune in Thursday, April 8 as Snocross looks back at the 2021 season with its virtual banquet, the AMSOIL Night of Champions. You can tune in on Facebook, YouTube or at snocross.com.

We’ll see you next season!