Take a Walk Around the “Scraptona”

“Every good build should start with a story; it should tell a tale.” That’s the goal of Tred Wear’s Michael Hunt with every vehicle he builds. Cue the Scraptona, one of his most notable builds ever.

Take a gander below as Hunt shows us this one-of-a-kind vehicle.

Literally made from scraps

The Scraptona earned its moniker for a reason – it’s literally built from the scraps of other vehicles.

“The tale here is, what if good ‘ol boys had run Le Mans back in 1972. What would they have brought? The Scraptona is the answer,” said Hunt.

Its shell comes from a 1969 Daytona Charger 500 that was left for dead in the Alabama backwoods. It had no glass, no rear end, no floor…not even doors. It had been cut apart for another project and couldn’t be restored, but worked perfectly for Hunt’s vision.

Continuing the theme, the Scraptona has a Superbird front end, Coronet fenders and Kawasaki motorcycle tanks for hood pods.

The Scraptona has the heart of a race car

Initially a skin sitting on a tube chassis, the Scraptona is actually a street-legal car that was made for the race track. It’s armed with a Petty R5P7 Mopar engine that revs to 8,000 rpm, makes 740 horsepower and turns the car into an “animal.” 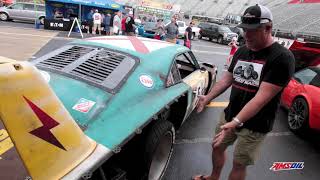 The Scraptona relies on AMSOIL products to keep its high-performance parts running. It debuted at SEMA and has appeared at shows across the country. We found it while hanging out at the Hot Rod Power Tour.

Keep your eyes peeled for the Scraptona on the streets!