The Oil Has To Do More

LSPI can destroy pistons and connecting rods, bringing an engine to a standstill in seconds. Original equipment manufacturers (OEMs) like General Motors (GM)* have addressed the issue by designing tests to gauge a motor oil’s ability to prevent these destructive events. Signature Series achieved 100 percent protection against LSPI1 in the industry-standard test.

OEMs have been aggressively downsizing engines to meet strict fuel economy and emissions standards while improving power and torque. Most new engines today use some combination of turbochargers, direct-fuel injection and variable valve timing to make more power than their larger counterparts while delivering improved fuel economy.

This scenario seems like all upside for drivers. But today’s smaller, hotter-running engines pose significant challenges to lubricants. The latest is a phenomenon called low-speed pre-ignition (LSPI), also known as “super knock,” which can destroy pistons and connecting rods.

LSPI is another version of engine knock, which has been around since engines were invented. In this case, it occurs under low-speed, high-torque conditions in turbocharged gasoline direct-injected engines – like when you’re taking off from a stoplight. LSPI is the spontaneous ignition of the oil/air mixture prior to spark-triggered ignition and prior to fuel being shot in. This form of preignition is more destructive than typical engine knock.

Just as your engine relies on a balanced network of components to function, the motor oil needed to protect it requires additives with the right qualities at the right quantities. While adding more of one ingredient or reducing another seems simple enough, small composition changes can have big impacts. We were determined to find a solution to the LSPI problem without sacrificing the performance of Signature Series in any way.

OEMs like GM have addressed the issue by designing tests to determine a motor oil’s ability to prevent LSPI. The GM LSPI Test records the number of peak pressure events during high-load operation in a turbocharged engine over a five-hour period. Passing the test is required to meet the GM dexos1® Gen 2 specification.

API has the coming GF-6 (GF-6A and GF-6B) which AMSOIL did this work in preparation for three years ago but the others won’t issue the upgrades until the deadline (after requesting the API extend the deadline a year ago).  When you go with other non-AMSOIL brands you get 2nd hand quality at best. And a big price increase which will happen when these new oils are debuted.

API SN PLUS is a recently released specification that was requested by the automobile industry to protect passenger vehicles from LSPI. AMSOIL anticipated this change, and the current formulations of Signature Series, XL and OE synthetic motor oil all meet or exceed the specification. Look for updated product labels featuring the new API “donut” in the near future.

Your customers can be confident that AMSOIL synthetic motor oils protect their modern engines against LSPI, helping their vehicles deliver years of reliable service. For more information on the dangers of LSPI, visit www.amsoil.com/lspi. 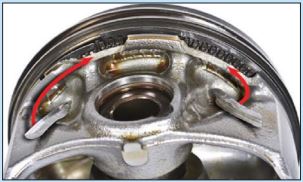 Example of piston damage due to an LSPI event observed during the testing of a competitor’s motor oil. The red arrows indicate sections of the ring land that have broken away from the piston

Scotty Kilmer talks about this very issue not knowing AMSOIL is the product all ready to beat the specification years in advance. 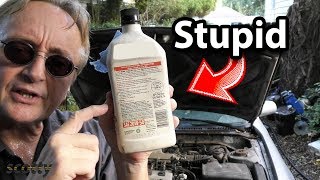