There are a lot of things we know are necessary in racing. A helmet, driver’s suit, gloves, appropriate footwear and (obviously) something to race on/in are all essential to striving toward that checkered flag. But, given the extremes encountered in these elements (frigid temps, nasty roost, desert dust, extreme heat), there are simple tips and tricks racers also find necessary to win.

Below are some racer tips and tricks you may not have known about.

Below-zero temperatures and harsh snow dust are often found at an AMSOIL Championship Snocross race. Latex gloves similar to what a doctor or nurse wear help prevent frostbite. Snow dust can impair visibility and inflict pain on the rider.

Oftentimes in colder conditions, you will see riders with tape on their cheeks to prevent frostbite and further harm from getting caught in the roost.

Tape adds a layer of insulation and decreases the amount of sweat evaporating off the skin.

Another insider secret in the racing world also comes in the form of tape. Only this time it’s painter’s tape.

Desert races kick up a ton of dirt and dust, which can obscure the driver’s nice, shiny helmet filled with sponsor’s decals. Cross the finish line in first place? Simply peel the tape off your helmet to reveal your sponsor’s pristine logos to keep them happy and in front of the camera.

When you gotta go…

It’s often an unspoken of, but widely used, tool in the desert-racing and enduro communities. Catheters.

Hydration is vital in the world of endurance racing and the more you drink, the more you need to go. Catheters prevent drivers from stopping to use the restroom on the course, gaining precious seconds so they can reach their destination sooner (because isn’t that the goal of racing?).

The other option? Just go in your suit. That’s right. But, desert-racing teams often switch drivers during the race, and who wants to hop into a wet driver’s seat? No, thank you.

When asked at King of the Hammers if he used a catheter, Brad Lovell simply said… 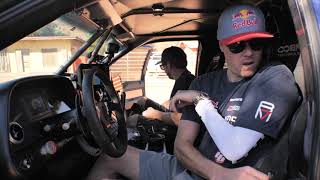 So, there you have it. The most dynamic of motorsports sometimes have the most simple solutions to make it through race day (well, besides the catheter).