No Fear and Loathing at the Mint 400

“In some circles, the Mint 400 is a far, far better thing than the Super Bowl, the Kentucky Derby and the Lower Oakland Roller Derby Finals all rolled into one. This race attracts a special breed…”  – Hunter S. Thompson

In 1971, author Hunter S. Thompson wrote his famous article “Fear and Loathing in Las Vegas” while covering the Mint 400 for Sports Illustrated. Thompson’s article was later adapted into a novel and then into a film starring Johnny Depp and Benicio Del Toro, signifying the Mint 400’s relevance to American pop culture. 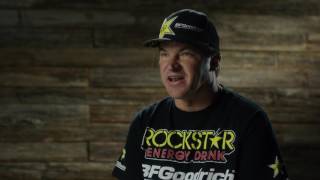 The Mint 400 started in 1967 near Las Vegas as a public relations event to promote the Mint Hotel’s annual deer hunt. Race organizers sent two matching dune buggies 600 miles through the desert from the Mint Hotel to the Sahara Hotel in Lake Tahoe, Calif. The event because famous overnight, with national television coverage drawing the attention of race fans across the country.

Some of the “special breeds” who have competed in this event include Al and Bobby Unser; Rick Mears; Mickey Thompson; actors Steve McQueen and Patrick Dempsey; and comedian Jay Leno.

AMSOIL racers to take to the desert

Coming off an impressive seventh-place finish at the King of the Hammers UTV race last month, two-time Mint 400 champion Bryce Menzies is looking to do it again in this year’s Trick Truck class. His fellow #TeamAMSOIL racer Brad Lovell is also looking to keep the momentum going following a second-place finish at last month’s King of the Hammers EMC. Lovell, who took second in the Vintage Open Class at last year’s Mint 400, will be competing in his first ever 6100 race.

Prior to racing on Friday, Lovell’s pit crew will participate in the Method Race Wheels Pit Crew Challenge along Fremont Street on Thursday evening.

Stop by the AMSOIL booth

AMSOIL will be located on Fremont Street throughout all the pre-race events. Be sure to stop by and pick up your exclusive Runs on Freedom™ bandana. Fill out our survey on Friday, March 8 for a chance to win the fender from Lovell’s new 6100 truck following the race.

On Thursday and Friday, Menzies’ UTV from King of the Hammers will be on display. Lovell’s Bronco will be displayed Thursday and his new 6100 on Friday. Both Menzies and Lovell will be in the booth Friday at 2 p.m. local time signing autographs for fans.

As always, tune into our social media channels for updates throughout the race. The week kicks off Wednesday, March 6 in Las Vegas. Check out the complete schedule of Mint 400 events here.