An interesting phenomena as an AMSOIL dealer which can be quite frustrating are the observations of some of our best customers. I’ve had diesel customers swear by our diesel oils and fuel additives remarking how they never thought an oil would make this much of a difference such as adding to mileage or driving past an overhaul but still they would never consider our products in their beloved motorcycle. At the same time I recall a Harley owner who spent a lot of money with us over the years and even got the police fleet in Cincinnati to use AMSOIL in their Harley police bikes but when I suggested he try our diesel oil in his 7.3 F350 Ford diesel he said, “No way – I trust only Rotella in my baby”????

Yes, that happens. AMSOIL runs circles around that diesel oil lasting three times longer and noticeable decreases in wear but somewhere emotions rise over truth and logic. Even the VP at the time (Now President) of AMSOIL INC – Dean Alexander admitted his own family members either see AMSOIL as a motorcycle oil which happens to make car oils or a car oil which happens to make motorcycles oils. Thus the reason they came out with the OE-Motor Oil line. No more excuses not to use AMSOIL in everything as we beat the competition on price.

Ok, I’ll get to my point, you can see form the above we are the favorite oil for a number any customers most costly engine but would you believe for every person who selects an AMSOIL product for these fancy recreation or work vehicles there are just as many who visit our store only for their small engines, mowers or generators? The same big truck owner how loves AMSOIL in the truck he depends on wouldn’t dream of spending more than $5 per quart for his mower or standby generator.

The AMSOIL Formula 4-Stroke 10W-30/SAE-30 “Commercial Grade” synthetic motor oil is one of our top sellers for a single quart (or two) sale. And as other synthetic lubricants AMSOIL makes, the ASE (product code for the 10W-30/SAE-30) drives in the testimonials. If you would rather keep your equipment longer and save on replacement costs as well as fuel costs, this should not be overlooked. And yes, we get plenty of people who only come into the store or order online for this single product. They see their small equipment as their greatest asset while their motor vehicles will fare just fine on the run-of-the-mill oils.

Here at the Synthetic Warehouse we refer to this one as “The Lawnmower Oil” as so many request it as that but it’s so much more than that. Great for diesel or gasoline non-turbo engines such as skid steers, portable generators, power washers, air compressors and even your car. 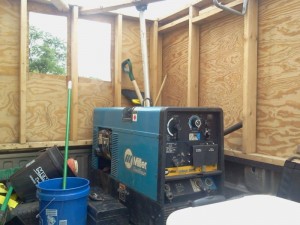 This is the 2nd testimonial of this type we received directly here at Synthetic Warehouse. Next door to our building in a large lot is a full time food truck vendor specializing in these wonderful Italian beef sandwiches. Prior to getting their trailer connected to the grid, they have used alternating generators – one pictured here. On time every day the generator ran out of fuel at 7 hours. The units power their food trailer, mainly two deep fryers. Propane is used on other appliances. I convinced them to try our small engine oil (ASE 10W30) as well as a bottle of QuickShot gasoline fuel additive as this runs 9 hours per day.

Consistently now they are reporting since switching to AMSOIL from a number of other products the generator reaches 8 and sometimes 8.5 hours. Even though they are connected to the grid, the generator continues to be used nightly at their 2nd location. I had another customer in Arkansas who had this same unit in his welding business with exact results.

In our store the Small Engine Oil (ASE) is one of our stronger sellers. Many dealers and retailers overlook this product unfortunately but 1/4th of my walk in traffic adds this to their purchases at some point and many others came into the store exclusively looking for this. It is a problem solver and insurance toward your equipment.

Is it safe to use 10W-30 in a small engine that calls for SAE 30 petroleum motor oil?

Yes. During operation the 10W-30 motor oil will perform like SAE 30 motor oil, and it is safe to use in an application requiring straight SAE 30 oil. If starting the small engine in temperatures below 50°F, the multi-grade oil may improve starting.