More Than Just a (Motocross) Number 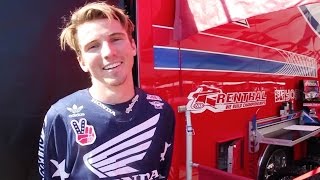 Let’s talk numbers, race fans…Supercross and Motocross numbers, that is.

Riders don’t simply choose their own numbers. Well, most of them don’t, that is. Instead, they’re assigned a number based on a system that’s been in place since 2000, with some tweaking throughout the years. To someone unfamiliar with Supercross and Motocross, the numbering system is downright confusing, but over the years I’ve come to understand (somewhat) how the process works. But, initially trying to explain it is like trying to explain how to invest in the stock market to an eight year old.

So, grab your notebook and pencil and get ready to be schooled.

This one is pretty self-explanatory. Every rider covets the #1 plate since it’s assigned to the rider who won the series the previous year, provided he competes in the same class or region. A good example is defending Monster Energy Supercross champion Ryan Dungey, who would have sported the #1 plate in Supercross this year had he not elected to retire. If the defending champ switches classes or regions following the season, he will use his assigned professional number instead of the #1 plate in his new class or region.

Single numbers (i.e. 2-9) are reserved for riders who have won a 250/450 Motocross title and/or a 450 Supercross title. Winners of 250 Supercross titles are not included because those are considered regional. For example, in 2014 GEICO/AMSOIL/Hondarider Jeremy Martin won his first 250 Motocross championship. With available single-digit numbers of 6, 8 and 9, Martin choose #6, which he still holds today.

If Martin hadn’t wanted to choose a single-digit number, he could have picked a career number. There are more than 30 riders with permanent career numbers right now. Winning a national championship is one way to obtain a career number. The other is to finish in the top 10 of combined overall Motocross and Supercross (both 450 and 250) points (i.e. Eli Tomac at #3). Some argue this isn’t fair because 250 West riders don’t compete against 250 East riders, while 450 riders compete against an entire field throughout an entire season.

Another rule? Career numbers cannot be three-digit numbers, unless…

The exceptions to the rule

Currently, one rider – Mike Alessi – has a three-digit number. He had the number before the two-digit limit went into place, meaning it was grandfathered into the numbering system. Also, if #13 is the next number available, riders can refrain from using it if they’re superstitious.

As for the rest of you

Riders who do not fit into any of the above categories, yet still finish in the top 100 of combined points, are assigned a number (i.e. Christian Craig at #32). Numbers are assigned chronologically after single-digit and career numbers are chosen.

So, there you have it. Make sense? Consider this your study guide for the current season (test to be held after the Supercross finale in Las Vegas). Some riders (re)debuted their numbers at the Monster Energy Cup in October, while the rest followed at Monster Energy Supercross.

Next weekend all the Monster Energy Supercross action heads to Oakland, Calif.

We’ll see you there!