After 10 years of de-rusting and restoration, Miss Belvedere finally found a suitor in the form of Historic Auto Attractions, in Roscoe, Ill. The Smithsonian rejected her. And, while other auto museums offered to display her temporarily, none wanted her around permanently. Now, someone has stepped up to the plate to provide the 1957 Plymouth her final resting place. 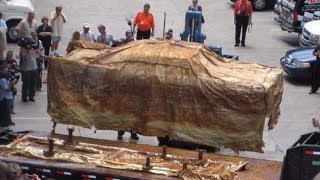 On June 15, 1957, the city of Tulsa, Okla. buried a new gold and white 1957 Plymouth Belvedere Sport Coupe in a time capsule in downtown Tulsa as part of Golden Jubilee Week, a celebration of Oklahoma’s 50th year of statehood. Before the car was buried, citizens were asked to guess what the population of Tulsa would be in the year 2007 with the promise that whoever came closest would be awarded the car at Oklahoma’s Centennial celebration in 2007. The entries were sealed and buried with the car inside the vault.

On June 15, 2007, the car was unearthed and transferred to the Tulsa Convention Center as part of Oklahoma’s Centennial celebration. Boyd Coddington, host of the The Learning Channel’s “American Hot Rod,” was on hand with his crew to help get the Belvedere running after spending 50 years buried in the underground vault. Coddington was to install AMSOIL synthetic lubricants and filters for the big dance.

Journalists from around the globe were on hand for this truly grand opening. Unfortunately, as Robert Burns once observed, “the best laid plans of mice and men often go awry.” In this case, the theoretically watertight vault failed in its mission. Two days before Sleeping Beauty was to be excavated, workers unearthing the Belvedere were shocked at what they found when they removed the cover of the 12 x 22 foot vault. Several feet of mucky water had seeped in.

The walls showed evidence that water levels had risen and fallen to the height of the car during the intervening years. Though shrouded in protective plastic, the evidence of potential disaster presented itself to an array of onlookers who stood aghast at the sight. Some even wept.

To paraphrase Alexander Pope, “To err is human,” but to be on the air, is still fine. The event still generated buzz and was aired on “American Hot Rod,” despite the unhappy outcome.

There were many lessons learned that week. One was that we now know what happens when you bury a Plymouth Belvedere for 50 years. And in the years since, we’ve learned how difficult it can be to restore a rust-bucket, even a famous one.

The greatly disfigured vehicle has not been a welcome fixture at car museums. And attempts to restore it have encountered a range of challenges. Dwight Foster of New Jersey’s Ultra One took a stab at de-rusting the vehicle, in the end acknowledging defeat with these remarks. “It’s basically like papier mâché. We didn’t see the extent of how bad it was until it came here. Anything we thought about doing we couldn’t because it was too fragile. We knew that whatever we touched would be a disaster.” Alas.

The photos that I took (here displayed) are from the day the car came out from its tomb. It was my first trip to Tulsa, and despite the ultimate outcome for the car the occasion was an adventure. Though a few hearts were broken, Oklahomans still celebrated 100 years of statehood.