As I plopped down on the sofa with my second cup of coffee Sunday morning, I tuned the DVR to watch the Supercross finals from Vegas (#centraltimezoneprobs). I knew two things from watching heats and LCQs the night before:

1. Those whoops were pretty gnarly.

2. With temperatures steadily approaching triple digits during the day, the track was drying pretty fast, making it super slick.

But, I also knew that GEICO/AMSOIL/Honda’s Chase Sexton just had to finish in sixth place or better to secure his first 250 Supercross championship.

Even if Justin Cooper (who sat 10 points behind Sexton) were to win the East/West Shootout, Sexton would secure his first championship by finishing at least sixth in the main event. Mimicking the patient, controlled riding style he’d displayed all season, the GEICO/AMSOIL/Honda rider sailed through in the top five, ultimately crossing the finish line in fourth place and securing a 250SX East Championship. 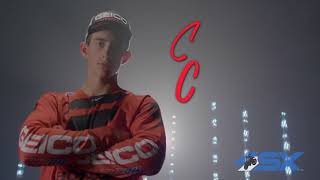 Initially slated to run in the East Coast series, Sexton switched to the West a week before the start of the season after an injury to Christian Craig. After breaking his collarbone while riding his mountain bike, the 2018 Rookie of the Year switched again back to the East. Cameron McAdoo stepped in, filling his vacant spot on the West. 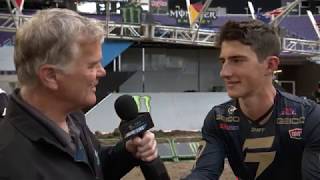 Consistently riding in control throughout the season, Sexton landed his first career win in East Rutherford, N.J. After an injury took front-runner Austin Forkner out of the title running in that same round, Sexton moved into first place with just the finale left to go.

Qualifying second Sexton headed to the final in Vegas knowing what he had to do. In addition to Sexton’s championship, GEICO/AMSOIL/Honda riders RJ Hampshire and Cameron McAdoo capped the team’s night with second- and third-place finishes, respectively.

“It feels super good; it hasn’t really sunk in yet, being 19 years old and winning my first championship is unbelievable.”

“It was the longest 15 minutes plus one [lap] I’ve ever done; track was gnarly. Yeah, it was a super-sketchy track, and the whoops were gnarly. [I] had some moments with my teammate, and there were some hay bales knocked out on the track. It was really hard to decide if it was a good move or bad move, but it couldn’t have worked out better.” 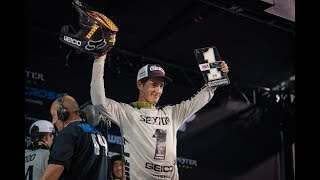 Riding high from the championship fumes, the attention now turns to the outdoors with the opening round of Pro Motocross from Hangtown in Sacramento, Calif., just more than a week away.