Where in the World is Team AMSOIL?

Sometimes things get a little hectic around here, race fans.

January is one of the busiest times in the AMSOIL Race and Events Department. Last week was the kickoff of Monster Energy Supercross and AMSOIL Arenacross. And with AMSOIL Championship Snocross in full swing, one of the most notorious stops on the tour, the Pirtek Snocross National in Canterbury, Minn., rounded out a full weekend of racing.

For me and another team member, it meant a trip to Dayton, Ohio for my first Arenacross event. Having been to a few Supercross races in the past, motocross racing is not all that new to me. But walking into the arena, I immediately noticed distinct differences between the two events.

First of all, Supercross events are typically held in open-air or larger stadiums with an open track and plenty of opportunities for the riders to “send it.” Arenacross events are held in smaller, closed stadiums on a much tighter track, offering plenty of opportunities for carnage. Turn that corner through the finish line? Better be on your A game because there’s a wicked whoops section coming up. The average Arenacross race is much more fast-paced. And the head-to-head racing adds an extra twist to all the action, like the AMSOIL DOMINATOR head-to-head race that opens the Snocross season each year. Check out some pictures below from our travels. 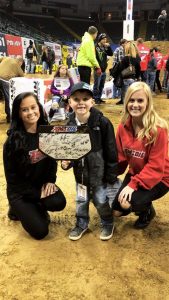 The AMSOIL Girls with a little fan during the Track Party. 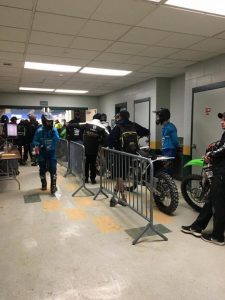 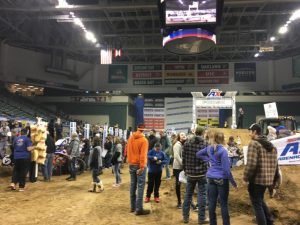 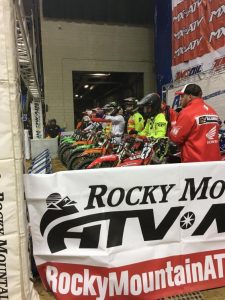 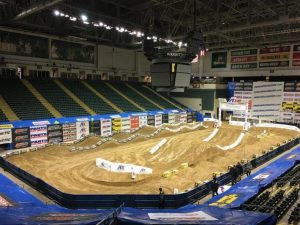 A view of the track. 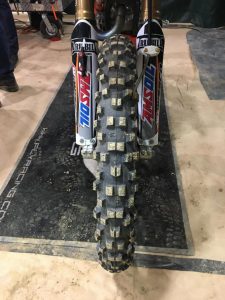 While we were taking in all the “braap” action on the dirt in Ohio, other members of the team were in the heat of the action as well.

Staying in the Midwest, our Marketing Coordinator Jake Raddatz was trying to keep warm in the frigid, below-zero temps that swirled around all the “braap” action on snow at the third round of the AMSOIL Championship Snocross stop in Canterbury, Minn. Not to be outdone, our Race & Events Manager Kevin Kastner, along with our Trade Show Representative Jim Swanson, were taking in all the high-flying action at the Monster Energy Supercross event in Anaheim, Calif.

The point is, our reach into the world of racing extends almost everywhere. And we’d love it if you joined us for the ride.

Where is Team AMSOIL off to next? Follow our AMSOIL Racing Facebook page and AMSOIL Facebook page for live updates from all the races we attend and to get insider access to all things dirt, snow and beyond.

I’m off to California next week for the third round of Supercross – we’ll see you at the races!