What’s the Difference Between DOT 3 and DOT 4 Brake Fluid? 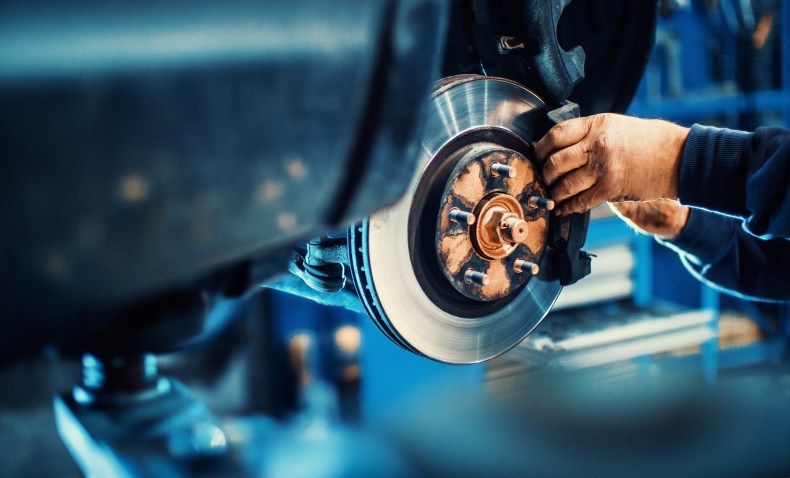 The primary difference between Dot 3 and Dot 4 is their respective boiling points.

I suspect I know your next question.

But first, some background. The U.S. Department of Transportation classifies brake fluid into four main categories:

Their primary differences are their wet & dry boiling points and their composition.

DOT 3 is the most common type used in cars and trucks today. DOT 4, however, is gaining popularity due to widespread use of anti-lock braking systems and traction control, which benefit from DOT 4 fluid’s lower viscosity.

DOT 4 is compatible with DOT 3, but features a higher boiling point. DOT 5 is silicone, meaning it doesn’t absorb water. It’s not compatible with the other brake fluids and is used mostly in classic cars that remain in storage for long periods and need a brake fluid that doesn’t absorb water. DOT 5.1, meanwhile, is used in high-performance and heavy-duty applications due to its high boiling point.

Bring it to a boiling point

So now we’re back to boiling point. What does it mean? After all, we’re not cooking this stuff.

Well, in the right operating and ambient conditions, you are cooking it.

Braking generates intense heat between the brake pads and rotors. Maybe you’ve seen a race on TV where the producers stick a GoPro under the car to show the brakes literally glowing red when the driver depresses the pedal. The intense heat can vaporize the brake fluid, causing it to become compressible, which leads to a spongy feeling when you apply the brakes.

Braking also places the fluid under intense pressure, potentially causing the fluid to boil. That leaves gas in the lines, which is compressible, leading to a soft pedal. In racing and performance-driving circles, this is known as brake fade, and it’s something drivers actively want to avoid. To drive as effectively and safely as possible, the driver must be confident that the brakes will perform on lap 10 as they did on lap one.

Brake fade can also come from the brake pad/rotor interface. The pads release gasses as well, which reduces contact between the pads and rotors. That’s why high-end rotors are slotted and drilled – to release gasses quicker, limiting fade.

Brake fade can affect nearly anyone. Descending a steep hill, especially when hauling a heavy load or towing a trailer, can generate tremendous heat if you ride or pump the brakes.

PRO TIP: Next time, downshift into a lower gear before descending a steep incline.

By the time you reach the bottom, your pedal may go nearly to the floor, making your heart rate go nearly through the roof.

If you like to toss your vehicle around a curvy country road for a little therapy, standing on the brakes going into corners can create sufficient heat to cause brake fade, too. If you get a little too zealous, you may end up going right through a corner and into the woods.

Brake fluid is hygroscopic, meaning it absorbs water (except silicone-based DOT 5 brake fluid). DOT 3 fluid, for example, can absorb up to two percent water every year. Moisture can enter the system when you remove the reservoir cap to add fluid, through worn seals and even through the rubber brake lines themselves. Thus the fluid’s wet boiling point is the number that more accurately represents what’s really going on in your vehicle.

Which makes it important to periodically flush the brake system and replace the fluid to remove moisture. Otherwise, not only will your brakes become spongy and unsafe, the moisture will slowly corrode metal components.

A good rule of thumb is to change the brake fluid every other year in passenger vehicles, and at least every year in racing vehicles. The AAA says 88 percent of motorists overlook brake maintenance, so you’re not alone if you haven’t changed brake fluid in awhile, like since you bought your vehicle.

It’s not too late to start, though. And when you do, check out our line of brake fluids for your vehicle. The easiest way to determine the correct brake fluid for you vehicle is to use our Product Guide.

I remember running my Mazda MX-5 Miata on the Motorsports Ranch track in Cresson, TX. In corners you literally stand on the brakes. Soon after that you feel the after effects before the units can cool.

Several years back (1988 in Tucson, AZ) coming down Mt. Lemmon in my 1976 International Scout I remember experiencing brake fade for the first time. Just as the article above states – my heart about flew out from my chest!! I was lucky enough to have a long level section of the road to pull over and let the brakes cool. You could smell them for an hour.