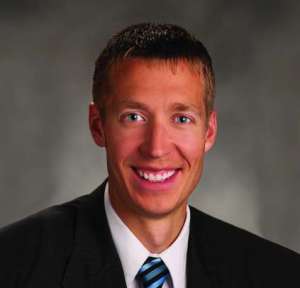 Fortunately, we have a simple solution.

It feels like forever ago, but it’s only been 13 years since the U.S. Environmental Protection Agency (EPA) mandated reduced sulfur content in diesel fuel, in 2006. Boy, were people angry. They knew sulfur helped protect their fuel pump and injectors from failure. Change is scary, and the thought of replacing expensive components even more so.

Fast-forward to 2019, and I rarely hear anyone talking about this. But the problem is even more prevalent now than it was then. Modern diesels demand even more from the fuel pump and injectors than before, increasing the potential for failure. So, why aren’t people still up in arms? My hunch is they have accepted the new reality. Or, they just don’t know what they don’t know when they buy a new truck today.

Today’s ultra-low-sulfur diesel fuel (ULSD) provides significantly reduced lubricity – a critical property in controlling fuel-pump and injector wear. While diesel fuel has traditionally had high lubrication properties, the desulfurization process used to strip the diesel fuel of the sulfur content to meet ULSD requirements also strips the fuel of some of its organic compounds responsible for lubrication. The ASTM D975 diesel-fuel standard mandates a minimum lubricity level. However, the Engine Manufacturers Association (EMA) wants the standard to provide for increased lubricity, but lost out on the control of the specification. While the EMA claims there’s a problem, it doesn’t carry enough clout to change the specification.

Since 2006, ULSD has accounted for nearly all diesel available in North America because the EPA mandated reduced sulfur to curb harmful emissions. ULSD now contains a maximum of just 15 ppm sulfur, compared to fuel that had up to 5,000 ppm sulfur prior to EPA regulations.

Lubrication is Key to The Latest Injector Technology

Waxes in diesel fuel lubricate the fuel pump and injectors, helping fight wear. Without them, the highly engineered components in modern diesels, particularly high-pressure common rail (HPCR) engines, can wear out and cost thousands in repairs. They can also develop deposits that interfere with an optimum spray pattern, reducing power and fuel economy. The editors of Diesel Power Magazine covered the problem of ULSD in the April and May 2019 issues. As reported, the Bosch* CP4.2 fuel pump that comes stock on 2011-2016 Duramax* engines has led to thousands of catastrophic failures. It’s culminated in class-action lawsuits in Texas and California against Bosch, GM*, Ford* and other vehicle manufacturers on behalf of individual diesel owners whose vehicles use that pump. When the CP4.2 fuel pump fails, it instantly contaminates the entire fuel system with metal particulates, costing $8,000 to $12,000 in repairs. The magazine reiterates what AMSOIL has been saying for years: “The way to be proactive in protecting a CP4.2 equipped diesel from an early demise is being diligent about using fuel additives that add lubricity with every fill-up.”

The CP4.2 pump is said to fail because of two reasons: 1) It’s designed with about 20 percent reduced flow volume than the previous generation pump, requiring it to work even harder. 2) ULSD isn’t providing enough lubricity.

Our testing of base fuels across the U.S. confirms the second point. ASTM D975 requires diesel fuel to limit the wear scar in lubricity testing to 520 microns. The EMA, meanwhile, sets its own, stricter requirement of 460 microns. As the chart shows, many of the fuels (blue bars) failed to limit wear to 520 microns. And none of them met the EMA’s 460-micron limit.

Diesel Fuel Additives are Not An Option! 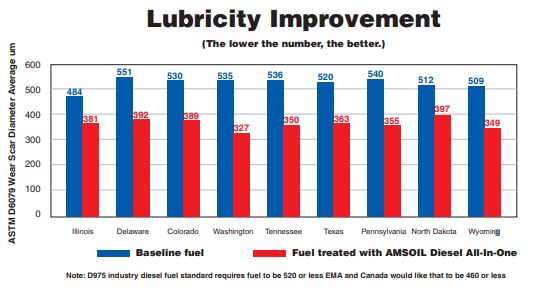