Engine designers are relying on technology that increases
performance, but places more stress on motor oil

Like the engine in your car or truck, the two-stroke engines that power your snowmobile, chainsaw or outboard motor are growing more sophisticated with each passing year. The same demands driving changes in the automotive market are influencing two-stoke equipment as well – the government mandates reduced exhaust emissions, while consumers want increased fuel economy and more power.
What’s a two-stroke engine manufacturer to do? These three areas of importance – reduced emissions, increased fuel economy and maximum performance – don’t play well together. Given the constraints of two-stroke engine design, it’s extremely difficult to build an engine that hits all three targets. Because they don’t contain intake and exhaust valves like a four- stroke engine, controlling emissions in two-strokes is a big challenge. One strategy in today’s oil-injected engines is to adjust the fuel/oil ratio to use less oil. While this reduces emissions, it comes at a cost since using less oil increases operating temperatures and invites several problems.
Excessive heat breaks down the oil and leads to deposits that cause piston rings to stick, robbing the engine of horsepower and reducing performance. In extreme cases, stuck rings can score the cylinder wall and piston skirt, leading to catastrophic failure. To stand up in this intense environment, modern two-strokes require oils with improved heat resistance and lubricity to deliver the necessary level of wear protection. This bodes well for AMSOIL Dealers since conventional lubricants are quickly being left behind.

Amazing attributes required for engine protection in these conditions

With snowmobile season gearing up, it’s a great time to look at a couple snowmobile engines that offer examples of the innovation we’re seeing in the two-stroke market. The Arctic Cat* C-TEC* uses electronics that adjust the fuel/oil ratio depending on operating conditions. In one promotional Arctic Cat video, we’re told to expect fuel/oil ratios as high as 65:1, depending on conditions, in the C- TEC2 engine. Less oil means lubrication becomes more challenging. What little oil is available to protect critical engine parts must reach components quickly, particularly in sub-zero cold, and stand up to intense heat and friction once it’s distributed throughout the engine.
The C-TEC uses an interesting configuration to deliver oil to the wrist pin and bearing. The fuel/oil mixture is injected into the boost-port side of the cylinder. At higher rpm, oil is also injected into the crankcase through a slot in the piston. The setup, according to Arctic Cat, improves performance, emissions and fuel economy.
The Ski-Doo* E-TEC* offers another example. Like many cars and trucks today, the E-TEC uses direct injection. Placing the fuel injectors directly in the combustion chamber allows precise control over the injection event, which improves power and reduces emissions. This arrangement, however, comes with challenges. In a traditional two-stroke engine, fuel and oil are mixed prior to being ingested by the engine, which helps the oil flow at lower temperatures since fuel reduces oil viscosity. In the E-TEC, fuel and oil are mixed only in the combustion chamber, so the bottom end of the engine – the crankshaft and rods – are lubricated by oil alone, making the oil’s cold-flow properties critical.
The bottom line is two-strokes require higher-quality oils than before. In the snowmobile market specifically, an oil must excel in three areas: cold- flow, piston protection and exhaust power valve cleanliness. AMSOIL INTERCEPTOR ® , our primary snowmobile recommendation, is proven to excel in all three areas. In 50 hours of extreme dyno testing, it completely prevented ring sticking and piston scuffing. It also boasts a -72ºF cold-flow ability. Visit amsoil.com/proof for complete results. We’ve invested countless hours in our Mechanical Test Lab, in the field and on the racetrack fine-tuning our two-stroke oils to deliver the benefits today’s two-stroke engines need. As the two-stroke market continues to evolve, you can bet we’ll continue to develop and manufacture synthetic two-stroke oils that meet and even exceed the demands of today’s toughest two-stroke engines, regardless of who builds them. 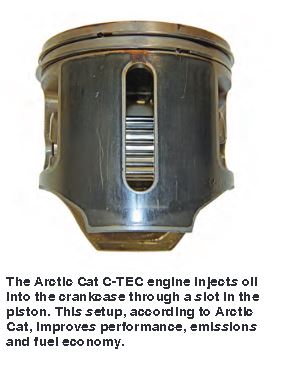 The Arctic Cat C-TEC engine injects oil into the crankcase through a slot in the piston. This setup, according to Arctic Cat, improves performance, emissions and fuel economy.
February 8, 2016