The Chemical Properties of Additives

THE CHEMICAL PROPERTIES OF ADDITIVES

Oil additives have had a significant effection modern transportation and industrial processes. The use of sophisticated additives has allowed equipment to evolve into what it is today, enhancing performance capabilities by providing added efficiency and protection to internal systems.

Although there may be a variety of additives directed toward a specific function, such as imparting controlled frictional properties, the performance of each can differ significantly. The concentration at which an additive is used also has a major effect on how well a lubricant performs a given task. To achieve the proper mix of additive and base oil chemistries, an understanding of how different additives interact is necessary.

Additives can function to lessen the damage caused from oxidation, extreme pressure, wear, rust and corrosion. Additives can also enhance a lubricant’s ability to control foam, separate or combine with water and keep the engine clean.

Some of the chemicals in conventional lubricants break down at temperatures within the normal operating range of vehicle and equipment components. Some tend to break down and generate contaminants in relatively mild temperatures when exposed to oxygen, which is almost always present. These unstable contaminants do not help the lubrication process in any way, and chemical additives are necessary to keep the lubricant’s performance in check under these oxidative conditions.

Oxidation is the breakdown of a lubricant’s base oil or additive molecules as they chemically react with air in hightemperature environments. Oxidation increases exponentially as temperatures increase and is further accelerated by the presence of water and catalysts such as copper, aluminum and other substances present in the application. Excessive foam is another contributor to accelerated oxidation.

Foam is bad for several reasons, but its contribution to accelerated oxidation is due in part to more surface area of the oil being exposed to air. As oxidation progresses, the oil typically begins to thicken and its acid number rises. Both these trends can be identified by oil analysis and the oil condemned when it reaches limits established by the oil analysis lab or the equipment manufacturer. If unaddressed, the oil will degrade to the point of producing varnish and sludge which can easily cause damage.

Oxidation is a natural process that cannot be stopped, but the quality, quantity and types of raw materials used in a lubricant can have a dramatic impact on slowing its rate. Regardless of the lubricant quality, lowering heat, keeping water out and minimizing foam whenever possible can help extend its life.

The Importance of Oxidation Resistance

Since oxidation produces acids, measuring the acid components in a lubricant is an indirect way of determining the occurrence of oxidation. This measure is known as the Total Acid Number (TAN). In non-engine lubricants, TAN can help measure the extent of oxidation, which in turn can help determine if the oil is suitable for continued use. TAN values can be determined through conventional oil analysis. 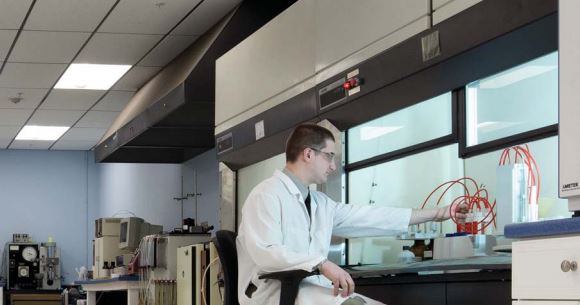 AMSOIL uses several tests to evaluate the oxidation characteristics of its lubricants:

Each of these tests has its own procedures, but all evaluate oxidation. The Thin-Film Oxygen Uptake Test (TFOUT) evaluates a lubricant’s ability to resist heat and oxygen breakdown when contaminated with oxidized or nitrated fuel, or water and soluble metals such as lead, copper, iron, manganese and silicon. Designed to mimic the operating conditions of a gasoline engine, this test demonstrates the consistently superior oxidation stability of AMSOIL lubricants.

During the test, the oil is mixed with other typical chemistries that are found in gasoline engines. The test is conducted under high pressure at a high temperature of 320°F (160°C). The mixture is pressurized along with oxygen and other metal catalysts, fuel and water to simulate the operating conditions of the gasoline engine.

The breakdown of the oil’s antioxidants is detected by a decrease in oxygen pressure, referred to as the induction time (break point) of the oil, which is recorded.