What is Synthetic Motor Oil?

1) Like most historical figures, there is a complex human beneath the reputation. Rockefeller has been called the most feared and ruthless businessman in our history, and simultaneously the most generous.

2) Kerosene was the main consumer product derived from crude oil at the time. The internal combustion engine did not yet exist, but Rockefeller grew rich thanks to the abundance of kerosene lamps in the nation’s homes.

3) Pennsylvania was the first region in which oil was discovered. Eventually, oil was found in Lima, Ohio, but its composition was chemically different, and the kerosene left a film on the lamps.

4) Lubricants literally played a major role in greasing the wheels of progress. The Industrial Age was all about machines enabling industry to be more productive, which generated wealth for industrialists.

5) Around the time the electric light bulb was replacing kerosene lamps, cars were replacing the horse and buggy. The 20th Century became the century of Big Oil. 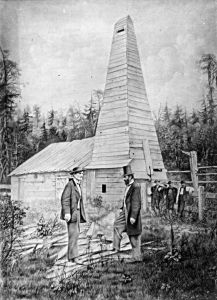 The Drake Well in Pennsylvania has been called the first oil well.

If it seems like I’m not answering the question posed in the headline, it’s because I wanted to bring you in through a back road. Item three in the above list notes that oil is chemically different based on its origins. I learned this years ago because my West Virginia kin had an oil well. I remember walking up the hill to the well when I was young. The adults discussed how the oil company said the oil was not worth as much as higher-quality crude. I may have my facts jumbled, but I believe they said it would be suitable for natural gas and would therefore not fetch as much money.

Crude oil contains hundreds of different kinds of hydrocarbons. Oil refineries distill crude and separate it into various products, like gasoline, jet fuel, diesel fuel, heating oil and asphalt. And the base oils that go into motor oil.

Refining is a process of physically separating light oil components from heavy ones. Crude oil contains a multitude of different kinds of molecules. Many are similar in weight, but not in structure. The refining process cannot distinguish such molecules, so a wide assortment of molecules is present in the finished lubricant made from crude oil stocks.

Some crude oil molecules are not beneficial to the lubrication process. For example, paraffin causes refined lubricants to thicken and flow poorly in cold temperatures. Molecules containing sulfur, nitrogen and other elements invite the formation of sludge and other by-products of lubricant breakdown, especially in high-temperature applications.

The assorted molecules of refined lubricants also have different shapes, making lubricant surfaces irregular at the molecular level. As lubricant layers flow across one another during the lubrication process, these irregularities create friction, which consumes power, reduces efficiency and increases heat and wear.

How synthetic oil is different

Rather than being refined from crude oil, synthetic lubricants are chemically engineered from pure chemicals using a process called organic synthesis. Organic synthesis is when you combine two things from nature to create something that does not exist naturally. This process gives synthetic oils significant advantages over refined oils. 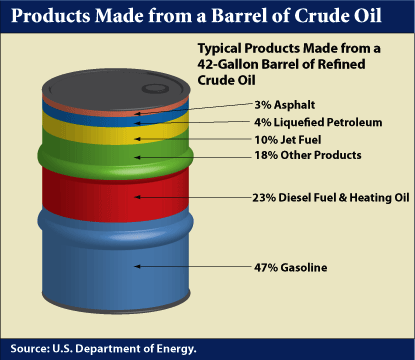 Products made from a barrel of crude.

Synthetic oil molecules are uniform, not irregular. This uniformity helps them resist thinning in heat and thickening in cold, which improves protection throughout the engine’s operating temperature range.

Their molecular uniformity also reduces friction as the lubricant’s layers slide across one another. Reduced friction increases energy efficiency for greater fuel economy and maximum power. It also reduces heat and wear for longer equipment life.

Another feature of synthetic oils is that they are designable. Many different kinds of base oils may be used to create synthetic lubricants, allowing a synthetic to be designed for virtually any application. Some base oils are ideal for use in extremely cold environments. Others are perfect for use in extreme heat. Some are extremely safe in applications in which refined lubricants pose a fire or explosion hazard. Refined oils simply do not offer the design flexibility of man-made synthetic oils.

This design flexibility allows synthetics to be tailored to the needs of everyday applications, such as automotive engines, commercial equipment or industrial machinery. That specificity helps ensure maximum life, horsepower, performance and fuel economy from the lubricated system.

If all this seems a little technical – to be honest, I did take a little heat for writing such a technical post this week – here’s all you really need to know about synthetic and conventional oils. The AAA made a big splash this summer when it laid out its findings in a study that demonstrated the superiority of synthetic oils. Everyone seems to be talking about it, from the AutoBlog to The Drive and even the folks at Business Insider. The titles are pretty straightforward, but I especially like the one from BI: “A new study by AAA puts to rest one of the most common questions car owners have.”  In other words, “that settles it.”

Now for the next question: What are you going to do about it?

Here’s my recommendation. Visit this page and find the AMSOIL synthetic lubricants for your vehicle. Experience firsthand what “better” really means.