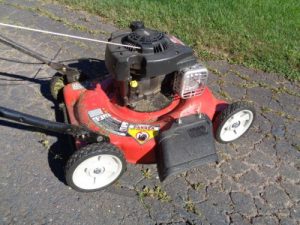 The simple answer: In small doses and used properly, it can be effective in hard-starting gasoline engines. But it can be bad for two-stroke or diesel engines. The real question to ask is, “Why does my engine need starting fluid in the first place?” Find out the answer, then fix the real problem.

The detailed answer: Ask five gearheads or mechanics their opinion of starting fluid, and you might get five different answers.

Starting fluid typically contains ether, which is an effective solvent. In this case, the starting fluid likely washed the inside of the engine clean of oil, allowing metal components to contact and eventually seize.

Diesel engines, too, can suffer the effects of starting fluid. Their high compression can cause the fluid to ignite too early, effectively causing pre-ignition, which invites all kinds of problems, like catastrophic piston or rod damage. Plus, it has no lubricating properties, so it can hasten piston wear.

With minimal work, you can find all sorts of cautionary tales on the Internet of people blowing up engines after using too much starting fluid.

Given the disdain many harbor toward starting fluid, why would anyone use it?

Because it can be effective in gasoline engines – especially carbureted engines – when used as directed.

For gasoline to combust, it must first be vaporized. The fuel injectors in your car or truck do a great job of completing this task.

In carbureted engines, fuel is vaporized as it’s forced through the tiny openings or nozzles in the carburetor. But carburetors don’t vaporize fuel as effectively as fuel injectors. Plus, gasoline doesn’t vaporize as readily when it’s cold. Anyone who’s started a carbureted car on a frigid morning knows this all too well. Plus, an engine requires more gas in the fuel/air mixture at startup, making a cold engine doubly difficult to start and keep running.

Starting fluid, on the other hand, does readily ignite in the cold, helping to start the engine and generate heat to more easily vaporize the fuel.

But a little goes a long way. Many of the problems with starting fluid can be attributed to operator error rather than the fluid itself.

In short, if you have to use starting fluid, use it sparingly. If a couple short bursts of spray into the intake don’t elicit a cough or two from the engine, emptying the can isn’t going to work, either. 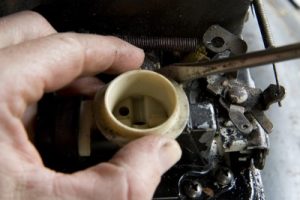 No amount of starting fluid is going to revive an engine with a dirty carburetor. Identify the real problem and get it fixed.

Instead, ask yourself why the engine needs starting fluid in the first place. There’s likely a bigger problem that needs fixing.

I was presented with this exact scenario last fall when my snowblower refused to start. So I reached for a can of starting fluid and gave the intake a shot. She sputtered a few times and quit. I repeated the process a few times, with the same result.

Eventually, I took apart and cleaned the carb. She roared to life on the first pull after that. In my case, emptying the entire can of starting fluid into the engine wouldn’t have done a thing, aside from washing the oil from the cylinder and causing wear. At the very least, it helped me diagnose what the problem was not: lack of spark or bad compression.

Bottom line: Starting fluid can help start a stubborn engine, but follow the directions and use it sparingly. If a little bit doesn’t work, a lot likely won’t, either. If your engine is consistently hard to start, find out why and get the real problem fixed.