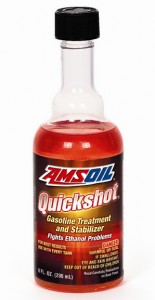 As our Performance Improver is our stores bestselling non oil product, it was designed for gasoline systems in automobiles only. Meaning large displacement engines with fuel tanks over 8 gallons. Many may not realize we have another product designed for all other small engines called QuickShot.

Use Quickshot to combat fuel problems and prevent deposits or varnish in any small engine applications or where the gasoline storage tank is 6 gallons or less. QUICKSHOT earned the 2011 SEMA product of the year as it was the only product proven to treat three major problems small engines suffer from. 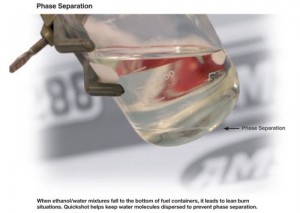 AMSOIL’s Quickshot proven to deal with Ethanol problems. 2011 SEMA product of the year.

On your next order be sure to add the AMSOIL P.i. and Quickshot. The long term fuel savings and reduction of intake problems will easily payoff and make your ride more enjoyable.

Also works with 2-cycle gear so pass up un-needed downtime with AMSOIL Quickshot! 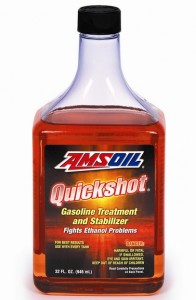 Fuel maintenance is a big issue, whether you own a motorcycle, dirt bike, snowmobile, lawn mower or other piece of equipment. Currently, most gasoline sold in the U.S. contains up to 10 percent ethanol (E10), while gasoline containing up to 15 percent (E15) is becoming available at stations around the country.

Because ethanol is susceptible to water intrusion, you need to be aware of the conditions in which you operate your equipment. Powersports and lawn & garden equipment should not be stored in damp or wet environments. When water is allowed to collect in the gas tank, the bond between ethanol and gasoline can break, causing a phenomenon known as phase separation. The ethanol bonds with the water and sinks to the bottom of the fuel tank, which can create a whole host of problems, including the formation of gum, varnish and other insoluble debris that can plug fuel passages and negatively affect engine performance. When this ethanol/water mixture is pulled into the engine, it creates a lean-burn situation that increases combustion-chamber temperatures and can lead to engine damage. Once this happens there is no easy or inexpensive fix. To avoid these problems, contaminated fuel tanks should be emptied and refilled with fresh fuel.

Alternatively, treat fuel with AMSOIL Quickshot® as a preventative measure to avoid rough-running equipment and other performance issues. Quickshot is designed to keep water dispersed throughout the fuel tank, moving it out as a normal part of operation and decreasing the chance of phase separation. Not only that, Quickshot helps clean deposits that have formed in fuel systems, injectors and carburetors, while also cleaning piston tops, spark plugs and combustion chambers. It also stabilizes fuel between uses and during short-term storage.

Unlike many competing fuel additives, Quickshot is extremely potent and not diluted. It provides effective cleaning action, making it an all-around great product for powersports and lawn & garden equipment.