Signature Series: The Measure Of Performance

SIGNATURE SERIES: THE MEASURE OF PERFORMANCE

In the NOACK Volatility Test, Signature Series scored far below the API limit for evaporation and proved it remains where it’s needed most – protecting your engine.

Nearly 35 years ago AMSOIL became the first oil manufacturer in the United States to use the NOACK Volatility Test as a measure of motor oil excellence. Today, it’s the industry standard. Originally developed and used in Europe, the NOACK test was not commonly used for lubricants until AMSOIL Founder Al Amatuzio pioneered its use for automotive motor oils in 1985. Previously, a lubricant’s flash point was the primary way to approximate its volatility.

Modern engines generate more heat than their predecessors. At elevated temperatures, the oil’s lighter-weight molecules can volatilize, or burn-off. The more volatile a lubricant is, the lower the temperature at which the lubricant will begin to evaporate. The more it evaporates, the less oil is left to protect the engine, and frequent top-offs are required. You may have owned an automobile that mysteriously “used” motor oil.

Volatility affects more than the rate of oil consumption. When light elements in oil evaporate, the oil’s viscosity increases. This thicker oil forces the engine to work harder and can result in numerous problems: 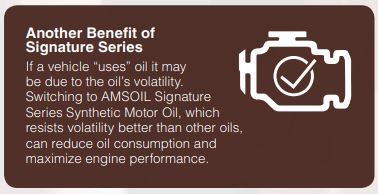 Signature Series has a uniform molecular structure that limits evaporation and keeps it where it’s needed most – protecting your engine. It limits the volatility (burnoff) that occurs when oil gets hot, protecting against the harmful effects of oil thickening, additive imbalance, higher emissions and oil consumption. A lower NOACK number indicates better resistance to evaporation. Signature Series falls far below the API limit for volatility, reducing the need for frequent oil top-offs and limiting vehicle emissions.

Note on these Tests and Additives

When your friend(s) tell you that they use and suggest one of these “aftermarket oil additives” to enhance the motor oil’s properties just smile knowing these totally skew and throw off the careful balance of the years of perfection of a high quality motor oil. AMSOIL is forever researching the best additives for their oils and even if it’s a great additive, the mixing process alters all of the below tests from working the way they should especially viscosity retention and anti-corrosion. Additives void all AMSOIL’s warranties and can be easily detected in the oils.

In the NOACK test, an oil sample is weighed and heated to 250°C (482°F) for one hour. Dry air is passed over the sample, carrying the oil vapors that have boiled off and depositing them in a beaker. The original sample is removed and re-weighed. Any reduction in weight is reported as a percentage loss of the original weight. 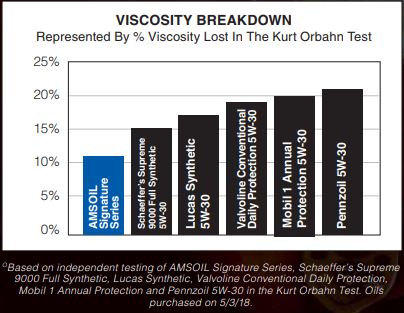 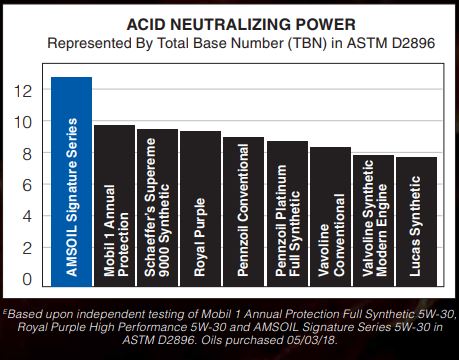 You asked for Schaeffer’s to be included in our testing and more to come!!