On the Road to SEMA with Chris Mangum of MAD Industries

Cars have played a defining role in so many of our lives, with the auto aftermarket becoming the beneficiary, helping people all over the world get where they want to go… in style.

There are so many ways to look at cars. It’s like the old adage about a tree. One person sees a poem, another sees a rocking chair, a third sees business opportunity or a job. The same with cars.

Cars played a central role in at least two of F. Scott Fitzgerald’s novels. Cars created financial empires for visionary men like Henry Ford, Walter P. Chrysler and the Dodge Brothers. Americans’ passion for their cars led to the creation of an aftermarket that included not only maintenance tools and replacement parts, but myriad ways to accessorize and bedazzle, to impress and sometimes even astound, as well as new ways to efficiently generate power and new ways to market all these gadgets and gizmos.

What’s especially fascinating when you go to the SEMA Show is seeing the myriad ways individual builders and designers take these cars to a higher level. One of these auto designers who consistently makes an impression at SEMA is Chris Mangum. Mangum, who hails from Costa Mesa, Calif., strives to make a lasting impression with every build.

His work caught the attention of Chevy, Honda and Ford, who’ve come to rely on him to bring their latest models to the SEMA show masses in peak form. His company, MAD Industries, can take a project from rendering to reality with a keen eye for innovation and design that’s become Mangum’s hallmark.

This year he’s been getting five vehicles ready for the show, including a 2018 Mustang convertible, a Ford F-350 Super-Duty dually, a 2017 Honda Ridgeline and two 2017 Ford Raptor Ecoboosts. Needless to say, he’s been busy. I spoke with the two-time SEMA Best of Show-winning builder last week.

ED Newman: When it comes to car design, what sets the best apart from the rest?

Chris Mangum: I really feel you’ve got to look at a car and not go overboard. Fine quality and clean design. We won best of show in 2015 with attention on the details of the interior. It’s not just about wheels and tires.

A lot of aspects get overlooked when building an award-winning car. They (the automakers) appreciate when you take what they have done and just enhance it. You want something that creates an impression that people will remember in a positive manner. Attention to detail…I like to tie theme into the interior.

EN: Building great cars and vehicles is an art as well as an engineering feat. How did you get into this field?

CM: I owned a sunglasses company. I’ve been building vehicles since I was 14. I worked on a Volkswagen for two years before I got my license. I began building vehicles to blend with my sunglasess company to look cool. Rick Pruden, MHT Wheels…put me in touch with Bob Kern from Chevrolet and I built two Suburbans, and the next year two more. Then two more.

We’re releasing our own Raptor now. It’ll be the next level above a Hennessey, Shelby or Roush. Every company that we’ve built for has stayed with us. 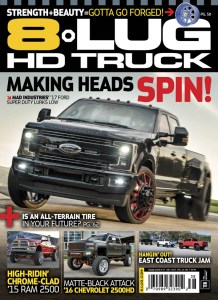 EN: Have you ever tried something that didn’t work as well as you’d have liked?

CM: There’ve been things I have done that I didn’t like the direction it was going. I would do it over. In the early days I did a couple H3s that I was uncomfortable with. I remember thinking, “I’m really not happy with the way it looks.” I re-did it and they liked it, but I wasn’t as happy as I would have been. We ended up re-painting after SEMA. Luckily this doesn’t happen too much.

EN: Is there anything that particularly sets your work apart, a fingerprint so to speak, of a Chris Mangum build?

CM: Our fingerprint is definitely “elegant” and very clean. Very, very crisp. I like white, I like black, I like colors. A lot of it is using colors that are dramatic enough without going overboard.

EN: And maybe we can get a comment on the lubricants you use.

CM: The lubricants are incredible. As a company, AMSOIL has been great. You engineer things like no one else does. Even when I was talking with your tech guy, the professionalism was A-1. Your products exceed expectations. Not only your products, but your people as well.

Thanks, Chris, for sharing your passion for excellence with all of us in the industry.