A CLOSER LOOK AT DIFFERENTIAL COVERS

Although they’re not always top-of-mind for enthusiasts, differential covers play an important role in the performance of pickup truck differentials. In addition to providing access for changing gear lube, differential covers help dissipate heat that can damage differentials, and they protect gears from contaminants like dirt and water, as well as rocks and other large obstacles encountered when off-roading.

Enthusiasts seeking a performance boost and improved cooling often look toward the aftermarket for upgrades over their stock differential covers. 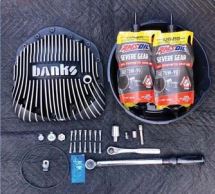 Upgrading a differential cover also offers the opportunity to add style to a pickup. Many differential covers are available with chrome-plating and polished aluminum for a beautiful finishing touch for customized trucks.

Look to the Experts

With many different differential cover designs on the market, it is important for enthusiast to find one that meets their specific needs. Experts like Banks Power specialize in this area and can provide professional guidance for enthusiasts seeking a performance upgrade.

Today’s vehicles produce substantially more horsepower, torque and towing capacity than their predecessors, yet the design of differential gears and bearings remains largely unchanged. Many differentials even use less gear lube and lower viscosities than before in an effort to reduce drag and increase fuel economy. In essence, less gear lube is responsible for providing more protection.

Differential designs have inherent weaknesses. In a traditional automotive differential, the pinion gear concentrates intense pressure on the ring gear. As the gear teeth mesh, they slide against one another, separated only by a thin layer of lubricant. The repeated stress the lubricant film bears can shear gear lubes, causing permanent viscosity loss. Once sheared, the fluid film weakens, ruptures and allows metal-to-metal contact, eventually leading to gear and bearing failure. The situation is amplified by severe-service applications like towing.

The extreme pressures and temperatures placed on gear lubricants can lead to a serious issue called thermal runaway. As temperatures in the differential climb, some gear lubes lose viscosity and load-carrying capacity. When extreme loads break the lubricant film, metal-to-metal contact occurs, increasing friction and heat. This increased friction and heat, in turn, results in further viscosity loss, which further increases friction and heat. As heat continues to spiral upward, viscosity continues to spiral downward. Thermal runaway is a vicious cycle that leads to irreparable equipment damage from extreme wear, and ultimately catastrophic gear and bearing failure. 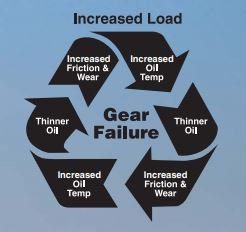