Fuel Efficiency is the result of less load.

A dealer recently sent in this testimonial from years back. His father was a stickler for quality and his skeptical manner required proof before being sold.

My dad was not a trusting man. He had lived through the Great Depression, and felt there were a great number of advertised products that were just too good to be true. So when AMSOIL synthetic motor oil came along, he did his own testing to expose or verify the fuel savings claims. (Dad was and electronics scientist.) 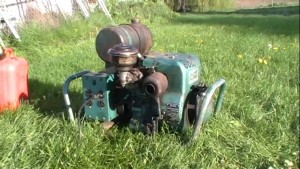 Report on tests made with AMSOIL synthetic motor oil in an Onan Power Plant:

One pint tin can had a copper tube soldered into the bottom of it, and connected to the engine for the test run, the engine was warmed up and let run out of gas then the can was refilled and with the load for that run, was started and let run until it ran out of gas again. In all tests a digital clock was used.

First, the tests were done with petroleum oil:

First, the tests were done with petroleum oil: With one heater used as a load, the test was done three times. The average time for three runs was 23 minutes and 38 seconds.

With two heaters as a load, the test was done three times. The average time for the rns was 16 minutes and 2 seconds.

Then he changed the engine to AMSOIL synthetic motor oil, and ran the engine for four hours before re-testing:

With one heater as a load, the test was done three times. The average time for three runs was 26 minutes and 7 seconds.

With two heaters as a load, the test was done three times. The average run time for the three runs was 18 minutes and 36 seconds.

 This test was made with machines rather than in a car, and was not affected by driver and driving conditions. The test was in 1977 by Charles Davison

Needless to say the writer’s father used AMSOIL for the rest of his life. He used the products in his cars and his RV,. In spite of a higher costs up front, he saw the benefits he gained from extended use of the products in both maintenance costs and longer equipment life.

AMSOIL: Thank you for sharing this innovative and interesting story. Email letters to: letters@amsoil.com

We had a neighbor who repeated an exact scenario with a welding generator which when switching from a competitor oil to AMSOIL they gained 1-hour in run time. Seems the larger the generator and the larger the load, the more difference one will see.  But any generator or combustion engine will last longer regardless of the fuel you save. Stationary single speed engines need a premium quality oil more than other oils. Engine life is significantly extended if a real synthetic is used early on.