A lubricant’s viscosity and how it changes under different temperatures and operating conditions is one of the most important properties that determines lubricant performance and protection.

Viscosity can be viewed in two ways: 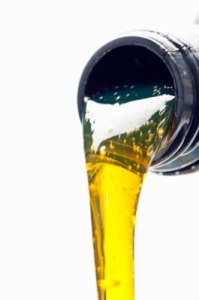 Dynamic viscosity, measured by the Cold Crank Simulator (CCS) test (ASTM D5293), is defined as the lubricant’s resistance to flow as indicated by its measured resistance, best thought of as the amount of energy required to move an object, such as a metal rod, through the fluid. It takes less energy to stir water compared to honey because the Dynamic viscosity of water is lower. Dynamic viscosity determines an oil’s low-temperature grade (the “5W” in 5W-30). Please note the 5W or 10W or 0W is not a measurement of how thin the oil is/.. It’s simply an index and relates to how close the viscosity remains similar to the operating viscosity as the oil cools. When it comes to synthetics think of the first number being a index of quality. The lower that number, the better quality and performance.  (measured in Brookfield Viscosity)

Synthetic fluids generally have much higher viscosity index numbers compared to conventional fluids, meaning they provide improved protection to critical components over a wide range of temperatures. VI is normally reported on the oil’s product data sheet, like this one.