Most people equate engine wear and deposits with a sudden, catastrophic engine failure that leaves you stranded alongside the road. In reality, wear and deposits are more likely to erode engine power and efficiency over time. Here’s how it works and what you can do about it.

To illustrate, imagine using a hydraulic floor jack. Pumping the handle will raise the vehicle as long as the release valve is tightly seated and doesn’t leak. A poorly sealed release valve, however, allows pressure to escape, causing the vehicle to sink to the ground no matter how much you pump the jack handle.

The same principle applies inside your engine. If some of the pressure created during the compression and combustion strokes is lost due to valves and piston rings that don’t seal completely, the engine will create less power. 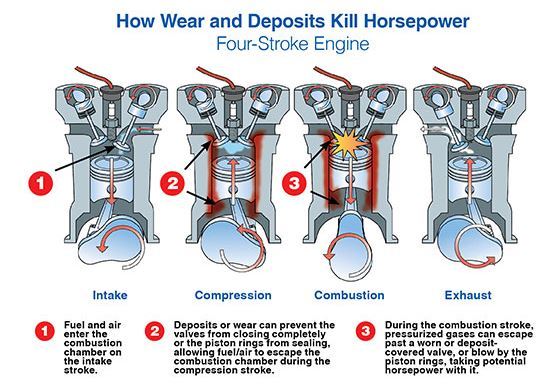 Over time, deposits or valve wear can prevent the valves from closing completely, interfering with a good seal. Wear can also interfere with proper valve operation, disrupting optimum fuel/air flow.

Worn or stuck piston rings produce the same effect. The rings are designed to move freely in their grooves and press tightly against the cylinder wall. They should form a seal that prevents fuel/air from escaping. Ring wear can interfere with formation of a tight seal. Likewise, deposit buildup can cause the rings to stick in their grooves, also preventing a good seal. As a result, some fuel/air escapes the combustion chamber during compression, reducing power. On the combustion stroke, pressurized gases can blow by the rings and travel down the cylinder wall and into the oil sump, taking potential power with them. This is what’s meant when someone says an engine has lost compression.

(Check out our 5 Ways to Boost Horsepower for Under $500)

Its outstanding performance helps prevent deposits and wear that rob engines of horsepower, helping preserve that like-new feeling you crave when driving.

FIND AMSOIL PRODUCTS FOR MY VEHICLE

*Based on independent testing of AMSOIL Signature Series 0W-20, in ASTM D6891 as required by the API SN specification.

**Based on independent testing of AMSOIL Signature Series 5W-30 in the ASTM D6593 engine test for oil screen plugging as required by the API SN specification.