How Extreme Heat Affects Your Engine 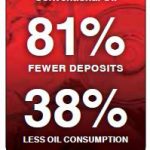 The average operating temperature of a passenger car/light truck engine is up to 235ºF, and higher under heavy loads. Motorists are becoming more familiar with the technologies responsible for this increased heat, specifically turbochargers and direct fuel injection. Automakers are designing engines using these performance-enhancing technologies to keep pace with increasingly strict fuel economy and emissions standards. Extreme heat, however, can lead to a host of problems, all of which reduce engine performance and life.

Heat can quickly break down motor oil, creating deposits on the intake valves, which impede airflow into the engine and contribute to poor sealing of the combustion chamber. This can lead to rough idle, misfire and reduced power and fuel economy.

When oil volatilizes, the lighter molecules evaporate, leaving behind the heavier components. This leads to viscosity increase, which makes the oil more difficult to circulate and reduces fuel efficiency. You may have experienced this when your car “uses” oil and requires frequent top-offs. Volatilization also creates emissions that contribute to air pollution.

If enough motor oil is consumed, eventually there may not be enough to reach all the complex parts of the engine, which can potentially cause damage.

Signature Series’ high-performance additives and quality base oils offer improved resistance to heat, maximizing the performance and life of your engine and keeping it clean.

None of these high contrasting levels of performance are required by American car manufacturers.  Hence never are they discussed at the local autoparts store when a customer requests data to lead them to the best choice. AMSOIL’s dedicated staff knows this but it’s their devotion to put out the best products, not ones which additive decisions were based on costs and overall profits needed. You see AMSOIL is a private family owned company so it lacks the stratagy which exists to drive in profits to stock holders. One should note AMSOIL now has products that mimic the “shelf brands” to compete on cost, again running circles around the competition. A growing market share is verifyong to AMSOIL that their approach is the best. As a performance automobile enthusiast myself, this verifies why we all notice various improements when we first switched to AMSOIL and hundreds of thousands of miles later.