Carnage, Mud and Mayhem: Mountain Mafia Team Knows How To Put On A Show 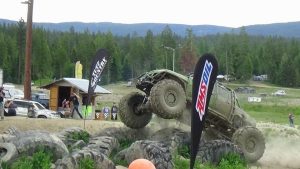 The Mountain Mafia put these off-roaders to the test.

What happens if a tree falls in the woods and no one is there to hear the sound?

I tell you, based on what I saw and felt in Idaho recently, it makes a noise. Probably a loud noise, too, because when a big tree collides with the earth, you feel the ground tremble.

One of the major industries in powersports is the off-road market. Its size is massive and its participants distinctive. According to a SEMA study, from 2010 forward the 4×4 industry has grown to $39.2 billion dollars. Like that big tree that fell in the woods, that growth may happen where eyes may not see, but it’s rumbling and roaring and making an economic impact. The enthusiasts who are into off-roading are reallyinto it, which was readily apparent here at the AMSOIL-sponsored Mountain Havoc, the second of six off-road competitions taking place in the mountains of Idaho’s northern panhandle.

If you’ve never been to this part of the world, the spectacular beauty sweeps over you like a full body massage for the soul. This is a part of the world where the original mountain men lived, people who wanted to get off the grid and be left alone to engage with nature. 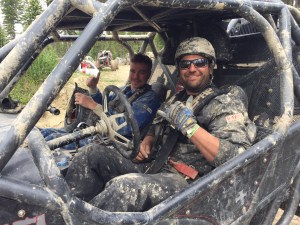 One of the most exciting events AMSOIL has sponsored during the past 20 years was the Top Truck Challenge (TTC), a Four Wheeler magazine construct that generated magazine stories, an annual DVD and a strong following of enthusiasts. TTC was a three-day event in California’s Hollister Hills that was closed to the public, though quite a few locals gained access by helping in various capacities. It was a major disappointment for many when Four Wheeler announced cancellation of TTC. Fortunately for competitive off-road enthusiasts, three men from Idaho sprung into action and picked up where TTC left off.

Mac Miltz, Grey Whittier and Ben Spinney felt the pain of former TTC competitors and responded, converting a 90-acre piece of wilderness into an off-road paradise playground in northern Idaho called the Purcell Trench Ranch (PTR). They call themselves the Mountain Mafia. This is year three, and they’re committed to continued growth. 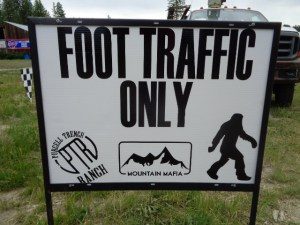 Welcome to the jungle.

This is logging country up here, and the logging trails provide access to remote areas where action can be staged. Unlike TTC, the public is more than welcome to attend, and gather they do. It’s Woodstock for gearheads, with tents, campers and trailers spread about various sections of the property, a family friendly 4×4 theme park nestled in the pines. In fact, the decision to choose the Mountain Mafia name stems directly from the idea of family. It’s as if everyone here is part of an extended family. 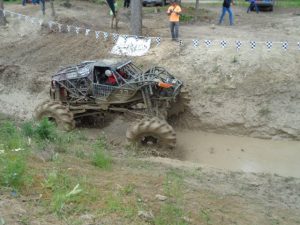 The Mountain Mafia staged six events this year, with Mountain Havoc, which took place this past weekend, being the biggest and baddest.

The opening ceremonies included Canadian and U.S. national anthems and a hearty welcome from Ben Spinney, the M.C./announcer for the weekend. Spectators assembled in the grandstand to watch the first event, the Side-by-Side Tire Tow Test, designed in part to enable introductions and also to enable the competitors to get the jitters out.

I remember noticing at the first couple TTC events I attended that a number of competitors hailed from Canada and the Northwest, meaning Idaho is a much more convenient destination than California. One team, however, came from the Deep South. Jimmy Smith showed up to put on a show, intending to give these Rocky Mountain boys a good smackdown. To his surprise the competition proved stiffer than anticipated. But the fans loved his enthusiasm and, by the end of the weekend, he earned the coveted $1,000 Badass Award, which he promptly donated to charity. 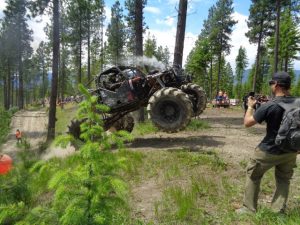 Finish line at the top of Saturday’s AMSOIL Hill Climb.

There were 20 teams here for Mountain Havoc, double the number that appeared at TTC. Not a one of them was a lightweight. Their vehicles came in a variety of shapes, sizes and colors, although in the end all were draped in mud outerwear.

Each of the five events took its toll on the rigs. Nevertheless, a majority succeeded in surviving till the end, though many fell short on one course or another.

Saturday began with the AMSOIL Hill Climb, followed by the AMSOIL Hill ‘n Hole. The Rock Course was a brutal event that took its toll on a number of vehicles, one of them being the Canadian crowd favorite, Pork Chop. The Mountain Man Course on Sunday was an all-day affair, separating the weak from the strong. There were some very impressive performances.

In the end, Leroy Latham defended his crown with a stellar final run. Brett Harrell grabbed second by one point over Justin Haft. These three were within three points of one another and near 30 points ahead of fourth-place Brian Foss. The husband-wife team of Ches and Char Beck were sentimental favorites, demonstrating what 15 years of teamwork and off-road passion can achieve.

I’ve included a few photos, but check out this YouTube summary of the weekend to get the full effect. 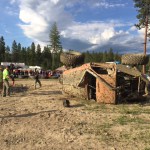 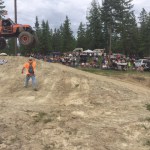 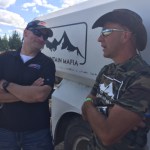 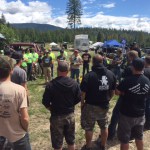 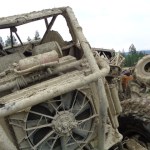 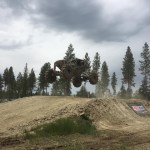 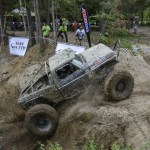 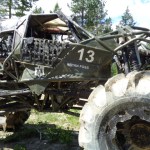 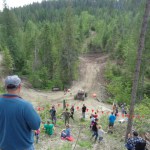 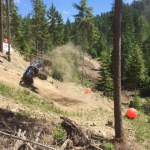 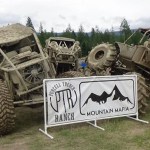