Leading the Way in Wind Power

Nearly 58,000 wind turbines dot the American landscape. Nearly 50 percent of those now use AMSOIL synthetic lubricants in their gearboxes. Here´s the story of how we shook up the wind industry.

We dove into the wind market more than a decade ago for the same reasons we enter most markets: to solve a problem. At the time, wind farm managers were struggling to find a wind turbine gearbox lubricant that actually worked! The majors failed to deliver superior protection without requiring frequent and expensive changes. Fully appreciating the challenge requires understanding how a wind turbine gearbox works.

If you’ve ever driven past a wind farm, you’ve noticed how slowly wind turbine blades turn – typically 10-18 rpm. The generator inside the turbine’s nacelle (the housing atop the tower), however, requires up to 1,500 rpm to produce the turbine’s rated power. The gearbox increases rotational speed from the low-rpm turbine blades to the high rpm electric generator. It uses a variety of planetary gears, helical gears and bearings to accomplish this.

All those moving parts must withstand tremendous torque and high speeds while operating in hot, humid, wet environments or sub-zero temperatures. Sometimes all of the above throughout the year. Gear lube can quickly fail in such conditions.

That was precisely the case with the predominant wind turbine gear lube on the market at the time. It tended to absorb moisture, which led to additives separating from the lubricant (called additive dropout). This leads to a form of fatigue failure called micropitting that can cause gears to fail. A wind-farm manager could expect 30-40 percent of the gearboxes in his turbines to fail within three to five years! This is unacceptable considering that, along with crane costs, replacing a wind turbine gearbox costs up to $500,000.

To help prolong gearbox life, managers resorted to frequent two-year gear-lube changes. That may not sound unreasonable until you understand the toll a single lubricant change takes. First, the turbine has to be shut down, which reduces profitability. A team of trained technicians must then mobilize a specially designed truck capable of pumping the new lubricant to the gearbox (up to 300 feet above the ground) while draining the old oil. Not only that, the gearbox requires flushing to remove contaminants, which adds additional time and complexity. Changing oil in just one gearbox can cost thousands of dollars. Changing oil in every gearbox on a wind farm quickly becomes cost-prohibitive.

Yeah – No Return on Investment…  Until – AMSOIL came along. 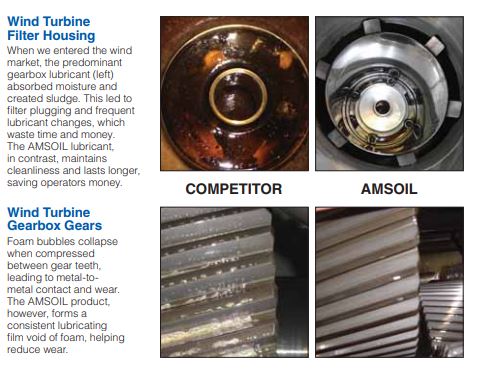 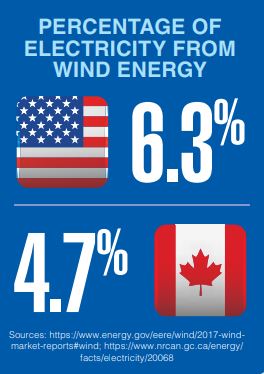 We went to work developing a better gear lubricant. In addition to years of lab testing, the lubricant was installed in seven wind turbines located in the Midwest. The turbines had been using a competitor’s oil and were in rough shape. In fact, the wind farm manager later told us he had expected the gearboxes to fail within six months of testing. Instead, the AMSOIL product performed well and the turbines continued running. We monitored lubricant and turbine performance every month.

The process uncovered several costly hurdles to servicing wind farms. For example, personnel must complete safety training, earn certification and carry millions of dollars of liability insurance simply to set foot on a wind farm, let alone climb a tower. In addition, wind farm managers expect suppliers to act as technical consultants and help them develop procedures for improving efficiency. We quickly realized that servicing wind farms requires a team of full-time, specialized experts. That’s why we handle sales to wind farms corporately rather than through independent Dealers.

Our test data impressed the biggest and most prestigious manufacturers in the world. We have since earned approvals from nearly every major turbine manufacturer and gearbox manufacturer, including Siemens*, Vestas*, Flender*, Nanjing Gear* and ZF*. This was a huge step since wind farm managers won’t use non-approved oils in their turbines given the astronomical costs should something fail.

Our gear lube is also the factory fill for one of the world´s largest turbine manufacturers. Otherwise it’s the run-in oil at nearly every major gearbox OEM that supplies the global wind industry. We continue to work toward earning more factory-fill agreements.  AMSOIL products are now installed in nearly 50 percent of all wind turbines in the U.S., in addition to turbines in Europe, China, India, Brazil and more. We’re proud to say that AMSOIL products have never caused a gearbox failure. That’s a tremendous achievement considering the state of the industry prior to our arrival.

What good is it for me?

You might be thinking, “That’s great for AMSOIL INC., but how does it relate to my car?”

We don’t have to but we are Devoted to Leading the Market for Solving Mechanical Problems.

The insights we’ve gleaned from our involvement in the wind industry influence additional product formulations. For example, we applied the advanced chemistry of our wind-turbine gear lubricant to the passenger car/light truck market via SEVERE GEAR® Synthetic Gear Lube. The chemistry that impressed the toughest critics in one of the world’s most demanding industries influenced the chemistry in each easy-pack of SEVERE GEAR. Developing and testing synthetic technology in wind turbines builds our knowledge and helps us continue to improve our full line of world-class synthetic lubricants.

Our leadership role in the wind industry strengthens the AMSOIL brand and helps validate our dealers efforts in the field. You want to find AMSOIL more easily and this is working. Additionally, it shows that our size and influence is larger than some people think, boosting our credibility. Who else can tell their customers that the biggest and most prestigious manufacturers in the wind industry selected AMSOIL from all the lubricant manufacturers in the world to develop a gear lube for their gearboxes. Any Johnny Come Lately cannot provide lubricant for 50 percent of U.S. wind turbines. This level of credibility speaks volumes about our product quality. Ask yourself, “If AMSOIL synthetic lubricants perform that well in wind turbines, imagine how well they can perform in my vehicles and equipment.”

While it may not be at the forefront of many enthusiasts’ minds, many customers actively look for companies that support sustainability. By servicing renewable-energy assets and maintaining a leadership role in the industry, we strengthen our image, which reflects well upon Dealers and Mechanics who stock AMSOIL products.

A single wind farm can require thousands of gallons of lubricants. To meet demand, we purchase increased volumes of raw materials at a time, helping reduce purchasing costs. Manufacturing to meet increased demand also leads to greater production efficiency, which further holds costs in check. We pass the savings on to customers.

We plan to continue growing our presence in the wind industry. It’s a key part of our strategy to diversify and strengthen the company, and it’s driving countless new accounts and commercial fleets throughout the nation. 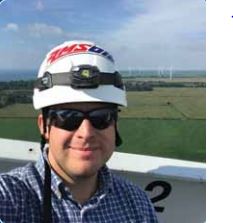 AMSOIL has never caused a gearbox failure. That’s a tremendous achievement considering the state of the industry prior to our arrival. 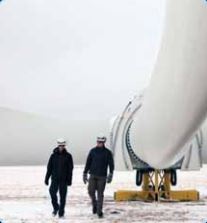