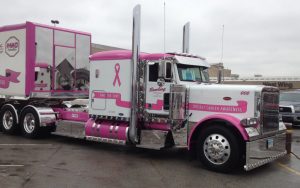 Somewhere between Kansas City and St. Joseph, Mo., I gained a lifelong respect for truck drivers.

Early in my career I accepted a job that required a move from Kansas City to Rapid City, S.D. In an effort to pocket more of the move allowance, I rented a truck for the contents of my apartment and a trailer for my company car, which I was to pick up in Sioux Falls, S.D.

Truckers and their trucks are often dedicated to a cause.

Thirty miles into the 700-mile journey, I attempted a right-hand lane change. Although I checked my mirrors twice and signaled well before the change, upon easing into the lane I heard the horn blast from the car I nearly side-swiped. Later, nerves still shot from the close call, I stopped for gas at a truck stop and looked at the trucks and thought, “How in the world do these guys do this?”

In recent years I’ve been fortunate to spend time with a small number of the 3.5 million professional truck drivers while doing research at events like the Mid-American Truck Show and Great American Truck Show. I found these folks to be conscientious, hard-working professionals deserving of our respect and acknowledgment. Hopefully by sharing a few insights about truckers during National Truck Driver Appreciation Week, Sept. 11-17, you’ll acquire a similar level of respect.

Starting with the house you live in, truckers have a big impact on your life. Each house built in the U.S. requires an average of 10 truckloads of materials. Chances are everything in your house was transported on a truck. According to the American Trucking Association (ATA), 70 percent of all freight tonnage in the U.S. is transported by truck, and 80 percent of U.S. communities receive their goods exclusively by truck. Trucking collects more than $650 billion in revenue, and one out of every 13 people working in the private sector in the U.S. is employed in a trucking-related job.

Economic pressures of the trucking industry

The reason trucking makes up such a significant part of the transportation economy is that for decades the industry has delivered excellent reliability and service at comparatively low freight rates. This outstanding value is the result of fierce competition and a focus on optimizing efficiency within the trucking industry. Although businesses and consumers benefit from this value, it presents significant challenges for the American trucker.

Increased traffic congestion is one of those challenges. Most truckers are paid by the mile – averaging between $0.28 and $0.40 per mile – and when they’re sitting in traffic, truckers aren’t getting paid. In addition, there’s a limit to the number hours truckers can spend on the road, which is an important safety consideration. But when they’re stuck in traffic they’re also burning up available hours. To compound the challenge there are often financial penalties for showing up too early or too late. These challenges are something to be mindful of the next time you’re stuck in traffic and frustrated because you can’t get to the mall.

Give truckers their due by giving them some room

Giving trucks some additional room when you merge, follow or pass is a great way to show your appreciation during National Truck Driver Appreciation Week. Passing is of particular importance because the truck in your mirror is carrying 15 tons of freight and can’t stop on a dime. The extra consideration you extend to truckers has the added benefit of making the road a bit more safe for everyone else.