AMSOIL introduced the world to synthetic motor oil in 1972, and we’ve been extolling the benefits ever since. While we’ve been joined by many vehicle and equipment manufacturers and competing motor oil companies over the years, the American Automobile Association (AAA) is the most recent company to promote the benefits of using synthetics. The popular club recently conducted in-depth testing to determine if it’s worth paying more for synthetic oil over conventional oil.

The answer is a resounding “yes.”

“Oil protects critical engine components from damage and AAA found that synthetic engine oils performed an average of 47 percent better than conventional oils in a variety of industry-standard tests,” said John Nielsen, AAA’s managing director of Automotive Engineering and Repair. “With its superior resistance to deterioration, AAA’s findings indicate that synthetic oil is particularly beneficial to newer vehicles with turbo-charged engines and for vehicles that frequently drive in stop-and-go traffic, tow heavy loads or operate in extreme hot or cold conditions.

“It’s understandable that drivers may be skeptical of any service that is nearly twice the cost of the alternative. While a manufacturer-approved conventional oil will not harm a vehicle’s engine, the extra $30 per oil change could actually save money in the long run by protecting critical engine components over time.”

AAA’s research included eight industrystandard ASTM tests focusing on shear stability, deposit formation, volatility, cold-temperature pumpability, oxidation resistance and oxidation-induced rheological changes. Each test was performed on five synthetic and five conventional oils. The results of this study by a reputable, thirdparty organization reaffirm what we’ve been saying for more than 45 years and give you one more reference point to back up your claims in the buy-sell process. 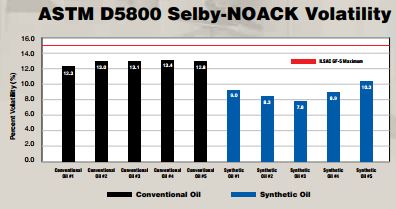 The NOACK Volatility Test (ASTM D5800) determines the evaporation loss of lubricants in high-temperature service. The more motor oils vaporize, the thicker and heavier they become, contributing to poor circulation, reduced fuel economy and increased oil consumption, wear and emissions. The lower the number, the better the resistance to vaporization. 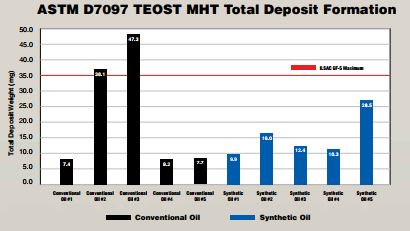 The Thermo-Oxidation Engine Oil Simulation Test (ASTM D6335) determines the deposit-resisting properties of lubricants in high-temperature service. Motor oils can form deposits when exposed to increased heat, reducing efficiency and contributing to poor overall performance. The lower the number, the better the resistance to deposit formation.

Engines run hotter and you must counter deposits