All kinds of boating innovations contribute to make fishing a fun experience.

State names are interesting. I was born in the Buckeye State, raised in the Garden State and currently live in the Land of 10,000 Lakes. It’s my understanding that Minnesota actually has 15,000 lakes, but the nickname simply serves as shorthand for, “Hey, we have lots of lakes.” I doubt that they had an actual count when the name was given.

Where there are lakes you will almost always find boats, which means we know a thing or two about boating innovations here in the Northland. What follows are a handful of inventions that have made outdoor living more enjoyable in our region. 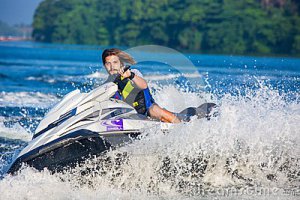 If you want to see someone having fun, watch a guy or gal on a Sea-Doo (Bombardier) or a Jet-Ski (Kawasaki). Essentially, they look like snowmobiles, except that riding snowmobiles across lakes is a bit more risky than this toy. I mention this first because when water sports are in season and I travel with Len Groom, our Technical Product Manager for Powersports, he can’t wait to get home and get out on the lake on his Yamaha Superjet.

Swimming season in Lake Superior is relatively brief. If you’ve ever taken a plunge, you’ll understand why. The inland lakes, warmed by the sun, can be quite enjoyable for swimming in summer. Below the surface, Lake Superior is so cold that people have died from hypothermia in these frigid waters. For this reason wet suits have been useful for underwater divers exploring shipwrecks and for people who use PWCs out on the Big Lake. (Trivia: Our Lake Superior is so massive that it could hold all of the water from the other four Great Lakes in addition to topping off with Lake Erie three more times.) 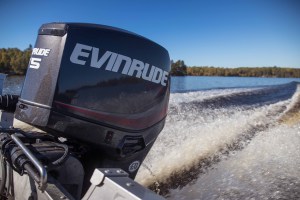 Invented more than a century ago by Ole Evinrude

People have travelled in boats since the dawn of time. Waterways were once the highways of the world. For most of human history the vessels were powered by wind or rowing. (My favorite rowing joke goes like this: “I have some good news and bad news. The good news is that you all get extra grub and whiskey for lunch. The bad news is that the captain wants to go waterskiing this afternoon.”)

Though the first outboard motor was patented in 1880, the design that established outboards as useful and popular was introduced by Norwegian-American Ole Evinrude, in 1909. Evinrude made thousands of outboard motors and, to this day, his name is on many a-motor.

It’s well known that AMSOIL was the first to bring synthetic jet-engine-oil technology to automobiles, but this was only the beginning of the company’s firsts. Being located on the tip of the world’s largest inland body of water contributed to a desire to apply the advanced chemistry of synthetic lubrication to both two-stroke and four-stroke marine applications. One of the features I find especially attractive is the lower toxicity of our HP Marine Synthetic Two-Stroke Oil, making it safer for the abundance of aquatic critters that call our lakes and waterways home.

Humidity can be a real problem in many parts of the country, even up here in Duluth, Minn. It may be due to all the melting snow and spring rains, but I can attest that it can produce unwelcome side effects. On one occasion shortly after we moved here, the humidity was so dense that the moisture in the air mixed with the oil in my Pontiac and turned it to a gooey substance that could have caused serious engine damage. As the saying goes, oil and water don’t mix.

As you can imagine, this can be an especially grievous problem for lubricants on the high seas or local lakes. You might be surprised to learn that AMSOIL Synthetic Marine Gear Lube is designed to protect against wear, even when subjected to 10 percent water contamination. I think that’s a pretty cool feature of this product. In fact, I have even recommended our marine gear lube to some off-roading enthusiasts who take their equipment through mud bogs, streams and ponds. Check out the chart on the product here. 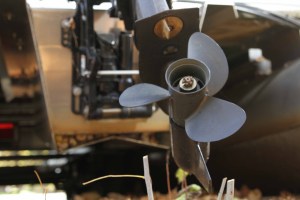 Rowing is relaxing, but propellers get you where you wanna go, fast.

I’m not sure when fans were invented, but the idea of taking a fan and using it underwater to propel a boat was a pretty creative idea. A screw-type propeller was invented and tested as early as 1827 in Europe. In all cases you need an engine of some kind to turn the propeller with sufficient speed to propel the boat. If you’ve ever visited the Great Lakes and seen the ore boats, you may have noticed how massive they can be. 1,000-footers are common. The propellers used to move these behemoths are massive. Anyone want to take a guess how many propellers there are in the world? There are more than a million boats in Michigan alone.

I got the idea for this blog post by reading boating.com’s list of 60 Boating Innovations. There are so many things in life that we take for granted, forgetting that at one point in time these things didn’t exist. Innovations that we take for granted today include nylon ropes, fiberglass, anchors, navigational systems, fish finders, inflatable life-jackets, resins, water skiing and more. Check out this list.

With summer just around the corner it may be time to get your boat dock in the water. Enjoy the season.

The PWC photo is used with permission under the CC0 / Public Domain License. Image Info

The editor forgot one more.. Craigslist. Yes when you are ready to pass that burden off to someone else and go a different route Craigslist makes it easy to get rid of it.