What’s the Difference Between Motorcycle, Dirt Bike and ATV Oil?

Most people who ask have an underlying question they really mean to ask: Can I use the same motor oil in my motorcycle, dirt bike and ATV/UTV?

Sure, you can use a single oil formulation for all your toys (assuming you use the correct viscosity in each). But you shouldn’t. Kind of like you can dump Filippo Berio Extra Virgin Olive Oil into your machines, but you shouldn’t.

Why? Because each application presents unique challenges to motor oil that one formulation can’t meet. We’ll break them all down to see why.

But first, let’s look at what the motor oil must do regardless of the application.

Whether in a Harley-Davidson, Kawasaki sport bike, UTV or dirt bike, the oil has to protect against wear and fight the damaging effects of extreme heat. These include deposit formation, which robs the engine of efficiency and power. It also includes “oxidation,” which is a ten-cent word that means chemical break down. The sooner the oil breaks down, the sooner it fails to guard against wear and deposits as well as it should. And the sooner it requires changing, wasting time and money.

That’s simple enough. And years ago it was possible to make one motor oil to protect all those applications. But today’s engines aren’t so simple. 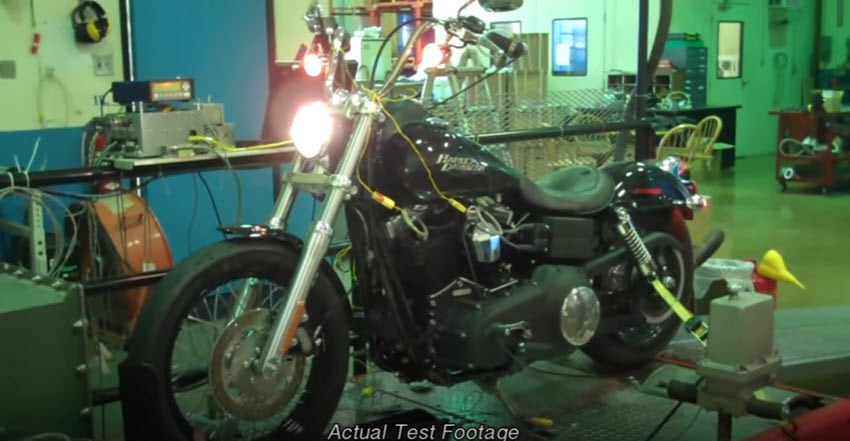 Take your classic air-cooled V-twin, like the engine found in most Harley-Davidson motorcycles. These engines get hot. How hot? In our 2012 Harley-Davidson Street Bob we tested in our mechanical lab, we saw cylinder temperatures reach 383ºF (195ºC). In contrast, our liquid-cooled 2017 Indian Scout running the same test demonstrated cylinder temps on average of 200ºF (93ºC).

Heat that intense can wreak havoc on the motor oil. The oil can lose viscosity and thin out, effectively turning your 20W-50 into a 10W-40, or worse. A lighter viscosity than what the engine is designed to use can fail to protect parts against wear. Extreme heat also hastens chemical break down.

It’s vital that the oil meant for your air-cooled V-twin is formulated to withstand such intense heat. To accomplish that, we formulate AMSOIL Synthetic V-Twin Motorcycle Oil with added resistance to extreme heat. Its naturally heat-resistant synthetic base oils maintain viscosity despite extreme heat and the shearing force of transmission gears “cutting” the oil’s molecular structure. That translates into reliable protection in the toughest riding conditions. 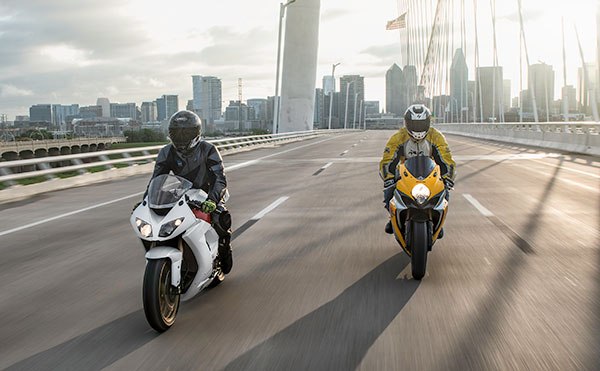 What about a metric sport bike? Can’t be much different than a V-twin, can it?

In this case, foam is one of our biggest enemies. A metric bike can easily surpass 10,000 rpm. The mechanical action of the crankshaft spinning that fast can whip air into the oil, causing foam.

If the oil isn’t formulated with fast air-release properties, foam bubbles will travel throughout the engine. When they collapse between meshing gears or bearing surfaces, nothing is left behind to provide protection except air.

We all need air, but it’s worthless at protecting high-performance engines against wear.

That’s why we formulate AMSOIL Synthetic Metric Motorcycle Oil specifically to resist foam. Its anti-foam additives weaken the surface tension of air bubbles, helping eliminate foam. This results in excellent wear protection no matter how heavy you lay into the throttle. 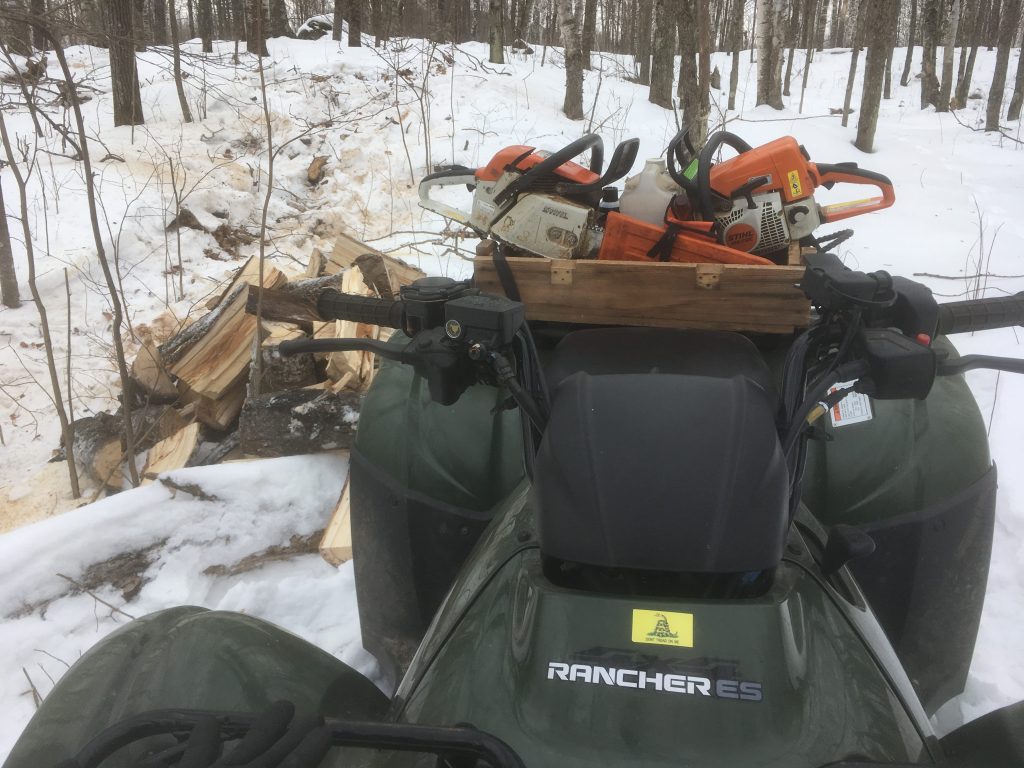 Your ATV/UTV is a whole different animal. Here, oil film strength takes on additional importance. That’s because these units are frequently used to perform heavy work at slow speeds.

My Honda Rancher ATV offers the perfect example. It goes days and even weeks without getting out of first or second gear. I pull a trailer loaded with firewood quite a but. I also pile the racks with a couple chainsaws, splitting maul, pry bar, gas cans and the other accoutrements of a fine time spent in the woods.

Slow, methodic operation when heavily loaded places increased stress on the engine bearings. If the oil’s film strength can’t hack it, the increased pressure will rupture the oil film, allowing the bearings to wear out.

AMSOIL Synthetic ATV/UTV Motor Oil is engineered with robust synthetic base oils that allow formation of a durable protective film in the toughest conditions.

You might think, “Sure, but my Harley runs hard, too.” True, but motorcycles are typically ridden recreationally, meaning they undergo increased stress when accelerating, but level out so to speak once you reach cruising speed. Riding at a consistent speed under light load creates less stress than, for example, pulling a stump out of the ground with your UTV or pulling a loaded trailer uphill through the mud with your ATV. 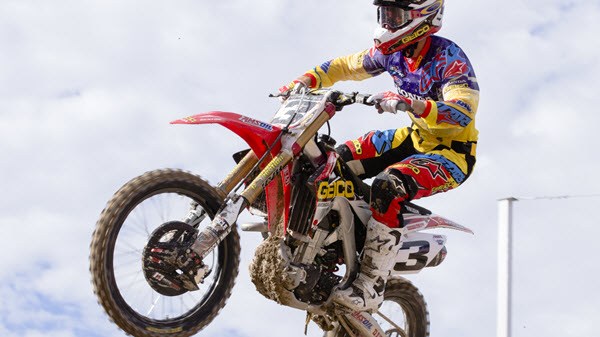 Finally, we have dirt bikes. Surprisingly, dirt bike operating conditions are similar to those of an ATV or UTV. True, you don’t plow snow with your Honda CRF450. But the bike similarly undergoes low-speed stress punctuated with periods of high revving.

In a race, you’re heavy on the throttle out of the gate. Then you back off into the first corner. You’re on the throttle through the whoops, causing the rear tire to spin freely when it’s in the air, but create a heavy load on the engine when it contacts the ground.

Where dirt bikes differ, however, is in engine design.

Dirt bike engines are typically lightweight designs meant for performance. Any time you remove mass, yet increase power, you increase engine stress. The combination of high rpm and lighter materials creates the perfect scenario for engine failure should the motor oil fail to do its job. Plus, dirt bike pistons tend to have shorter piston skirts to reduce friction. That may help your lap time, but it doesn’t help engine longevity. The shorter piston wants to rock inside the cylinder, which concentrates tremendous force on the tiny area where the piston skirt and cylinder wall contact. Only a microscopic oil film provides protection in this area, meaning the oil had better offer the film strength needed to help the engine survive.

Check out the image to see what can happen. This piston cracked after more than 100 hours of use. Wear likely shrunk the piston and caused it to rock back and forth in the cylinder. The continual hammering action finally caused it to fail.

Making matters worse, dirt bikes barely hold any oil. Roughly one quart is common. Think about everything that single quart of oil must do:

That’s why most riders change motor oil frequently. Rebuilding the top-end every 15 hours or so isn’t uncommon, either.

But just because dirt bike oil is changed frequently, don’t think you can use a cheap oil. It’s far less expensive and less hassle to pay a little more up front for a good oil than it is to rebuild your top-end.

The moral of the story is this: the days of using one motor oil for all your toys is over. Each application creates unique challenges that are best suited for a tailor-made motor oil formulation.

FIND AMSOIL PRODUCTS FOR MY EQUIPMENT